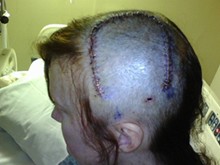 I’ve been encouraged by others to post this so here goes; an amazing story of a wonderful, intuitive lil’ doxie and how she saved my life.

At 12:30 am on Sunday, Mar 2nd, 2008, I awoke suffering multiple seizures on my right side due to a Meningioma (benign) grapefruit-sized brain tumor that apparently had been growing in my head for the past 5 to 10 years.

Rather unfortunately, the first time I called 9-1-1, the Oceanside Ambulance and Paramedics team and its training crew came and immediately misread my situation as a more common occurrence they are used to at the pier and began treating me like an addict or an alcoholic going through withdrawals and/or an overall high anxiety, panic attacking, hyperventilating 49 year old woman who should just “Stop shaking my right side and arm and calm down” because I need to just “ride it out”. They left with my okay because they couldn’t determine what was wrong with me and, of course, I had no idea either and I was tired of their combined unprofessionalism and rudeness. Months would go by before I later found myself with the Captain and educating his team on other symptoms to look at for different possibilities and scenarios. Happily they welcomed me there to talk to them.

As background on my lil’ 9.6 pound life-saver, when the wildfires began in San Diego County in October 2007, Lucy, my long-haired mini chocolate and tan dapple dachshund, had gotten very ill and was diagnosed with Pancreatitis which had her taking steroids for 6 months. During this time of her drug therapy, in January when we first attempted the process of weaning her off the steroids, Lucy suffered what looked like a stroke but turned out to be a seizure. Her vet said it appeared this was the one and only one she ever had. I guess happenstance was occurring for a reason yet to be known. We monitored her and never saw another thankfully.

My second call to 9-1-1 was all because of Lucy’s efforts. My seizures became more difficult in the time that passed since the first call to 9-1-1. I decided to get on my couch and put my right side against the back of the cushions w/my leg up on it in order to keep it from banging around and hitting things. Then I just tried very much to focus everything I had in me to try and pause or slow down the seizures going through my entire right side. I thought I’d start with my foot and work my way up my body to where the seizures were more extreme in my arm and neck. I envisioned a “healing bubble” of sorts which would travel up me. As soon as I started this process, Lucy ran up the couch ramp and jumped on my feet. It was as if she knew exactly where the “bubble” was within me. At this point, she was nonstop licking and tugging on me as if to say “Don’t stop what you’re doing”; and it was up to me to listen to her and remain focused on the traveling “bubble”. I was still completely unable to grab any one of the phones which had all fallen off the coffee table to the floor and there was no way I could reach any of them and since my left arm was under me keeping me on the couch. As this “bubble” continued to travel up my right side, Lucy’s plan became clear when the bubble arrived at my stomach. Lucy went nuts jumping and bouncing on me and then she began to grab/bite at my arm and she kept on pulling, tugging, licking and grabbing. She was determined (thank God) to grab my right arm and somehow get it on the floor – which she did – which helped me to grab a phone and start pushing buttons. Miraculously, I got 9-1-1 on the phone (I think they reverse called me) and all I had to say was come, come now please and take me to the hospital.

I have not tried to answer the obvious questions: Did her seizure help her to know what was coming? How did she know to do what she did? These are and always will be unanswered questions and all I know is one thing: I rescued the cutest and sweetest little shy dog on August 21, 2004 who had arrived via an abusive puppy mill in Texas to the dachshund rescue organization in Orange County. I tell anyone that listens that on that day she rescued me too – we both had a lot of love to give so we both got what we needed – each other! But now, as of March 2, 2008, she became my hero and she saved my life for a second time. Lucy and I have a beautiful bond of trust and love because I believe we were meant to be paired together. Obviously, we were meant to be paired together – but for a much greater purpose indeed. Lucy has also become more confident and independent since I was in the hospital for 2 weeks and in those 2 weeks my two sisters spent only 3 nights at my house. There were neighbors and coworkers coming in the mornings and evenings for her food and steroid schedule. Fortunately, the day before I was released from the hospital, she had taken her last steroid and received a perfect health report. After 2 weeks of being home, I’m off the steroids too. Lucy took good care of the house in those 2 weeks. I do believe there is nothing she can’t do now and as soon as is possible, Dog Beach has our name on the guest list!

UPDATE: Shockingly and most sadly, on April 14, 2008 (less than one month after I got home from the hospital), Lucy died from seizures due to a brain tumor. My guardian angel took excellent care of me and still is … she sent me Maggie whom I rescued from the same dachshund rescue in Brea, CA.

Mags is another long-haired mini chocolate dapple doxie who is much younger than Lucy and has a great deal of energy which is working out great for my rehabilitation. She has been very instrumental in my recovery to regain mobility and weight bearing strength on my right side. And what a sense of humor she has too – she loves the pool (not swimming, mind you – lounging)! Both doxies are/were extremely well behaved and very, very sweet companions.

I have been blessed with a wonderfully fantastic neurosurgeon – Dr Mark Stern who is excellent at removing tumors, my radiation oncologist – Dr Mary Ann Rose who combined w/Dr Stern, got the fishtail remaining out of my sinus cavity thru a one-time laser radiation treatment, and my new neurologist – Dr Allen Gruber who listens to his patients before prescribing more drugs. My drug therapy now allows me to work, drive, fly, workout, swim, and anything else I want to do with very limited seizure activity every so many months.

God has and continues to bless me with many treasures in life – fantastic family, superb friends, best bosses ever, a healing dog and a recovery dog now. I am most grateful to share my story and pray it inspires others to realize their ability to survive. Not all of us can do it alone – some of us need a Lucy in our lives:) and He saw fit to make sure I had her and Maggie too.

Since writing this story, I’ve undergone SRS Laser Radiation surgery in December 2009 and another craniotomy in Feb 2010. I will be undergoing a “yet to be determined” procedure after the results of my latest MRI this morning. The non-epilectic “awake” seizures remain with me but are manageable overall with drug therapy. I intend to fully recover from this pyhsically and emotionally with a great team of doctors and family and friends. As someone who is not used to accepting help, I’ve learned a great deal from many generous people in my life by letting them be who they are and do what comes naturally in human nature – help others. God always has a plan – just trust in Him and go with it.

God bless everyone and I hope my story can be of some help to some of you.