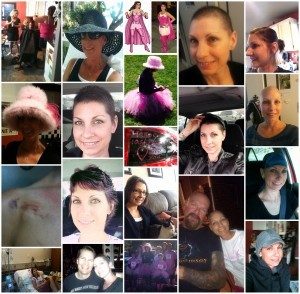 In July of 2012, at the age of 40, I was diagnosed with stage 3, grade 3, triple negative breast cancer (TNBC) on the left breast. I am BRCA negative with no family history of cancer. I went through 16 weeks of chemo (Taxol and red devil), followed by a radical bilateral mastectomy and then 6 weeks of radiation.

Before radiation was done, I noticed I had a lump about the size of a marble growing right on my mastectomy incision. My doctors thought it was scar tissue, so they took it out, not clearing the margins or doing a biopsy before taking it out. In the meantime, I had this hole in my chest from where the tumor was removed, and it would not heal and became infected twice!! I had to pack the hole twice a day for 6 months!

At this point, my doctor here in town sent me down to Stanford, which is where I found out the reason for the hole not healing was because I had a local recurrence, meaning another 16 weeks of chemo (carbo and Gemzar), followed by another major surgery where the doctors discovered two more tumors, one that had metastasized to my skin and one that attached to my chest wall. During surgery, they zapped me with intraoperative radiation. Surgery was followed by five more weeks of radiation. During radiation, I had to take Xeloda, a chemo drug that helps to enhance the radiation.

Two months later (7-5-14), my armpit was sore and swollen, so back down to Stanford I went for scans. They found a 3 cm lymph node, did a biopsy, and sure enough, triple negative!!!! This time, they bumped me up to stage 4, so back on chemo I went (7-31-2014). November came, and the doctors put me on a six week break from chemo so that I could have surgery on 1-21-2015. Nine lymph nodes were removed. Luckily, only one was affected!!

In the meantime, a lump by my ribs on the left side showed up. The lump was located by a previous drain site. I traveled to Stanford for my pre-op, only to find out I needed a biopsy, which came back positive once again for TNBC! They called it “seeded from the drain,” meaning one tiny cell could have been on my drain, and when the drain was removed, the cell stayed behind, creating yet another tumor! Luckily, they were able to remove it at the same time as my lymph nodes!

So now, I’m on my third round of radiation, along with Xeloda (chemo) to enhance the radiation. I finished treatment on 4-29-15 and had my first clean and clear scan on 8-20-2015. I have recently been asked to do a bikini competition for breast cancer survivors. We are a group of about 16. Our competition is June 11, 2016. We are all taking our lives back after dealing with cancer! You can check out our story at http://tinyurl.com/zlmr9by.