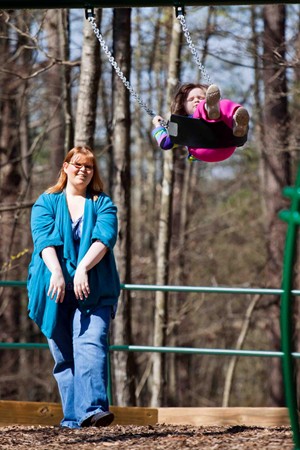 Time after time when I’ve told someone my life story (or at least the crappy parts) they told me I was “strong.” I never understood that word as pertaining to me. I looked at the world around me and the people that I considered strong. They were true fighter’s; the people who stood up for what was right, who weren’t afraid of what life may bring to them, and took care of people no matter what the personal sacrifice. Only recently have I really begun to understand how the word pertained to me. I no longer feel unworthy of the word.

I’ve lived through being molested, abused, raped, and just generally being treated like crap most of my life. Those were the easy things. For me, losing people I loved was always the hard part. Cancer became real for me when I watched my grandfather suffer for 3 long years.  However, I also watched my mom do everything she could do in order to take care of him, and my grandmother. True strength pushed through when just six months after losing my grandfather, my grandmother was diagnosed as terminal. Again, my mom was there…stronger than ever.

The day my grandmother passed, I got my first tattoo. My tattoo was a yin-yang symbol that was surrounded by the characters of “love, family, strength, and rebirth.” I was starting to realize, maybe I really did have strength.

During my grandparents’ cancer battles I finally escaped from an abusive relationships and started facing the fact that I may never have a child. I’d tried for almost 10 years, I had been diagnosed with PCOS (and had to have my right ovary removed), anxiety disorder, ADHD, and clinical depression. Just about 5 months prior to my grandmother’s death, I also began experiencing horrible pain in my abdomen. I’d had cysts rupture before but this was happening every month. Finally, the month after she passed, it got to the point where I would spent over a week in bed. I was barely able to move, in a city where I had no family. I went to doctor’s, one after another, trying to find out what was wrong. The worst pain had passed, but the every day pain was getting worse and moving from just a localized pain to all over my lower abdomen. One gyno told me “let’s do surgery and see what we can find.” I said “I’m going to see someone else.” The next doctor went through every test he could think of before finally saying, “I think it’s adenomyosis but the only way to tell is to remove your uterus or put you into pre-menopause.”

I thought, OK  stop! I am not willing to remove my uterus, when the thing I’ve most wanted in my life is to become a mother. I’d rather live in pain for the rest of my life than take away my last chance. So, that’s what I did, until I met the guy. The guy, came at a time that I was at my lowest. He held me when I was in pain, or while I cried. He was okay with both the prospect of never having kid’s or finally realizing my dream of having kids. Nine month’s later, we were pregnant! I told everyone! Then a month later… we weren’t. I didn’t tell anyone (he was nice enough to do that for me). But wait! It was possible! Three months later, it was a reality, a very painful reality.There were nine months of a lot of pain, but they were also very happy (if a little nervous) months, because my little girl was finally on her way.

One month before my due date I started having contractions. My doctor’s swore it was Braxton-Hicks but I knew it wasn’t.  Finally I couldn’t handle it anymore, the day after her due date I begged my doctor to induce. She did, but within an hour of her breaking my water I was in so much pain, that I was close to passing out. She finally called it, and they took me to prep for cesarean.  That wasn’t easy either. After trying to do a spinal tap they realized I could still feel far too much, and I had to be put to sleep. My pain was so bad I was in the hospital for 5 days. I had insomnia, and my insomnia was worsened by the fact that I didn’t want my daughter out of my sight. I was still in pain even on the medication’s, and I didn’t sleep for the first three days. Finally my doctor knocked me out with an IV push.

The next year brought three surgeries: one to remove my gall bladder, one to remove a cyst and look for endometreosis, and another to again to try and find endometreosis. (I’d talk about the pain of each but I think you get the point). The final endomentreosis surgery was a week before Thanksgiving. I cooked Thanksgiving dinner for 15 people. I wasn’t going to let the fact that I was on double doses of pain med’s stop me from doing what I loved. This surgery was different from the first endo-outing, this time they actually found it! A diagnosis for all the pain, right!? Wrong. The pain remained and the OB/GYN said what he found wasn’t enough to account for my pain.

So back to more tests. I even had a VERY short-lived stint with a “pain management clinic.” They accused me of being a drug-addict after one of my bottles of medication was spilled (it was liquid so unfortunately rather easy to do). I told them I didn’t give a damn about medication. I wanted a diagnosis, and I didn’t need the medication to live my life and take care of my little girl. One day, my doctor finally said, “I think you have fibromyalgia.” I was surprised. I didn’t have pain all over, just  in my abdomen. Then she touched the trigger points, all but three hurt. She started asking questions and all of them were indicators of fibromyalgia. These things I’d lived with for so many years and never considered to be anything but normal were indicators of fibromyalgia.

I FINALLY had a diagnosis! Three years of tests, pain, surgeries, and all the things that went with those things, had led to that. She started me on medication and almost immediately I started to feel better. I found out the pain I thought was “normal” was far from it. The nurse who accused me of having a “low tolerance for pain” had no idea what she was talking about. The people who treated me like it was “all in my head” were wrong. Just like the doctor’s who told me I would need medical assistance to have a child or may not have one at all were wrong.

I’ve gotten better in the past year and half. I’ve also gotten another diagnosis to go along with the lovely ones I already have: bipolar disorder. Along with the diagnosis has come new medication, and more figuring out the right ones with the right dosages where all the medications work in harmony. I finally feel “strong.” I know that as bad as something seems, it does get better. I’ve taken up causes I believe in, so that I can be more like the people I admired growing up. I want to be one of those people I looked up to for my daughter. I want to be worthy of her admiration the same way I still look up to my mom. No one is perfect. We all have our flaws but the real strength is in the willingness to FIGHT for what you believe in, even when you are scared, even when the pain seems like it is just too much, and even when it seems like the fighting will be what kills you.