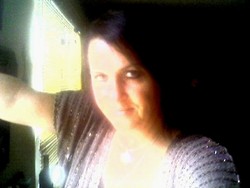 Swinging my feet back and forth off the end of the examining table—repeatedly drooping a sandal to the floor, I found my self lost in the framed print of a lavender field beside me on the wall. The sea of purple mesmerized me as I tried not to contemplate what news would greet me when the doctor came in. Moments later a white clad one opened the door, and she was smiling. Good news, I thought. But it was only her attempt at a bedside manner, her smile was a mask—a mask she thought would protect me (and herself) from the news she had to give me. “Angela, your blood work and radiological procedure results have come back and I am sorry to tell you that the situation is serious. You have Cirrhosis, a type related to NASH. NASH stands for Non-Alcoholic Steatohepatitis. As a secondary affect of that you also have diabetes and I will need to refer you to a Specialist in order to get you placed on the Liver Transplant List in Chapel Hill.” I sat stunned, trying to process all the words she had just spoken. In one breath she had just delivered my death sentence—all the while smiling, as if her smile mattered in the least. Was her smile going to give me the years with my son that I so looked forward to? What about his HS Graduation, college, marriage, grandchildren? The rocking chair days with my husband? She explained the whole process to me of what would come next, but her words were garbled and lost somewhere in the space between she and I. All that I could think of was “I am dying.”  The days and months that followed involved multiple doctor appointments, trips to the Liver Transplant Team and blood-work, blood-work, blood-work. That was two years ago, May 2008.

The events leading up to that day were minimally uneventful really. I had begun to feel really tired, noticed I was bruising very easily and was having bouts of hypothermia type episodes. One morning I woke with my head soaked in a pool of blood, which puddled on my pillow. During the early morning hours, the raven charm I wore around my neck had made a sliver of a cut on the left side and it had been spurting blood onto my sea blue linens. For how long I don’t know. I woke my husband and we immediately starting applying pressure. The bleeding continued and I was getting very woozy after 30 minutes. But the bleeding stopped. The next day I went to see my doctor. This began a process of discovering what was going on in my body. My blood work showed some unusual levels and I was referred to several different doctors to help diagnose my condition.

There were also some concerns that I may have a tumor. These were the first indications that something was wrong in my body. They then sent me to the Cancer Center to rule out that possibility and then back to my primary care doctor for further testing. An abdominal CT with contrast, liver biopsy, Upper GI scope, and more blood work that tested me for everything from a –z, resulted in those fateful words…”cirrhosis due to NASH (Non- Alcoholic steatohepatitis) end stage—liver transplant needed.”

I was bewildered. I had never been a heavy drinker. Never used illegal drugs. What had caused this? I, being the researcher that I am, went into investigative mode to unravel this mystery. What I discovered was that any medications taken over a long period of time (including over the counter painkillers like Aleve or Motrin) could cause liver damage. Now I had been on more types of medication over the course of my life than I could even remember the names of. From the early days of my marriage when I was on birth control to regulate my cycles, to the infertility drugs to help me have a baby, to the depression and mood swing medications that came when the infertility treatment process resulted in multiple miscarriages…there was a plethora of possible causes involved—one of which was just called Metabolic Syndrome. Upon further probing into family history I found liver cancer showed up twice on my mother’s side of the family. And Diabetes was a very common trait in our ancestral DNA. My mind swirling and emotions swinging pole to pole, I finally began to deal with the practical prognosis and probabilities of what the future held for me. I was not in a good place. I was scared, angry, and feeling very alone, though surrounded by people I knew loved me. The Angela that I was becoming in this process was not the Angela I knew as ME. I began to shelf her. I kept my emotions locked in the dungeon that had become my existence. People had to be kept at arms distance. It was safer to not feel anything. I didn’t want to even think about what my life was going to evolve into, nor how this illness was going to affect my son and husband, friends and family.

Over the next year, the routine was consistent. Doctor’s appointments and blood-work became a bi-weekly norm. All the while I, trying to home school my son, keep working on my degree in communication, take care of the home and my poor husband working himself to death to bring in the income as well as pick up the slack with errands and what I couldn’t get done in the home. Then in May 2009 I found myself in the hospital due to metabolic acidosis because of a diabetic drug I had been placed on which was contraindicative for liver patients. One month later I was back at the transplant team and they removed me from that medication and placed me on another identical one—just a different name. They were trying to treat the diabetes in hopes of helping the liver function better. It didn’t work. The next medication caused the same metabolic acidosis and also I began to bleed from the vessels in my stomach and esophagus—with vomiting resulting from the accumulation of blood in my stomach. And then the transfusions to address anemia began. Over an 8-week period in April/May of 2010, I was in the hospital for a total of 4 visits. The last visit was the most dramatic. Again I was vomiting blood, anemic, had portal-vein hypertension, and a brain/blood ammonia level that should have placed me in a coma.

This occurred two days before my sisters wedding, of which I was to be her matron of honor and my son was to be her ring-bearer buccaneer. It was a long anticipated Renaissance Wedding. And there I lay in the hospital with my husband and son looking at me like it was the last time they would see me. The roller coaster of erratic emotion wasn’t helping my condition. How much more…how many more special meaning-making moments would I miss? How many would they miss because of me? This is just the beginning of my story. In September 2010 we spent a week at Chapel Hill going through the “Listing Approval Process.” The Liver transplant team there is really amazing. We got the happy call a few days after returning home that informed me that I had officially been listed as a transplant candidate. So now we wait, how long, we don’t know. One thing that we do know is that we will get through this process and keep pressing on as the phenomenal family that we are. I have discovered over these last few years that since I have been an advocate all these years for one cause or another that perhaps one reason this has happened to me, is so that I can be the messenger I was destined to be~ an advocate for organ donation—the gift of life. So while I wait, I join hands with all those waiting as well and just keep speaking the message of HOPE. I will Keep Fighting Like a Girl, with everything within me. Shouting from the Rainbow Tops—Never give UP!!