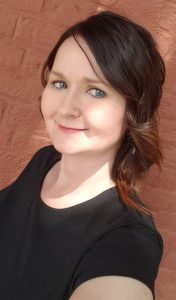 My name is Laura Parker, and I am a breast cancer survivor!

I had two types of breast cancer, the most common AND the most rare: DCIS and Paget’s disease of the breast.

It’s become a passion of mine to spread the word and make it more known about Paget’s Disease of the Breast. This is my journey with battling two types of breast cancer at the age of 34.

I was misdiagnosed for a year. I had been seen by a dermatologist who performed a culture swab and skin shave biopsy. I was told that it was a rare bacterial infection–Finegoldia magna bacteria (F magna)– that is usually found in the GI tract. I was treated with topical steroids and antibiotics. It kept coming back and had started to get to where I always had to keep my nipple covered due to the oozing and ulceration.  I knew in my gut it was more serious.

During the course of the nipple showing signs of changes, I found a lump. I had multiple mammograms and ultrasounds. The tests all showed I had Fibrocystic breast disease with microcalcifications; I was 33 yrs. old at this time.

In December 2016, I went to my GYN, because for a year I had been battling the crusting oozing nipple. Two weeks later I was seen by a general surgeon for an Excisional biopsy of the areola. In January 2017, the surgeon ordered a mammogram, ultrasound, and MRI contrast; he also ordered an ultrasound biopsy after the initial scans came back to see if the lump was DCIS.

Between the time the excision biopsy was performed and the ultrasound-guided biopsy, the doctor called me and told me that it was Paget’s disease of the breast, stage 0, and is very rare. This type of disease is fast developing, and the only treatment is a mastectomy, so mentally, I had already begun preparing for a mastectomy.

I received a call on 1/26/17, while at work (I was an adjunct professor at a local college that recently closed) from the surgeon who performed my Excisional biopsy stating that the lumps I had were DCIS and confirmed that I had Paget’s. A few minutes later I received a second call from him now stating, “he wasn’t sure what it was” and I’d need further testing. At this point, I wanted a “yes or no” on the secondary type of cancer. I wanted a second opinion, something concrete, not an “I think you have cancer.” At this point, I self-referred myself to Brown Cancer Center due to the fact I needed more answers and did not want to undergo any unnecessary testing.

I met with Dr. Nicolas Ajkay in February 2017, who went over my history and had all my scans and pathology reports reviewed. He confirmed that it was Paget’s disease of the breast and DCIS without further testing. Dr. Ajkay had only seen one other Paget’s case in his long career, and that’s was of his 88-yr. old grandmother!

I was now 34 yrs. of age.  I met with Dr. Bradon Wilhelmi for my plastic surgery consult–he is amazing. He could not be a more amazing physician! He gave me his personal cell phone number in case I had any problems during recovery or treatment, something he does for all his cancer patients. On March 1, 2017, I had a radical mastectomy with one lymph node removed with tissue expander placed.

I was ER- PR- HER2+ due to the Paget’s, with high-grade DCIS. I did not have to go through chemo or radiation because my margins were clear. The recovery for that surgery was horrible–the expander fills were probably the worst.

On 10/5/17, I underwent fat grafting with Dr. Wilhelmi to fill in the depression areas left behind after my mastectomy.  Because I was left with no fat tissue, my skin was scraped so thin that you could see through it. During my initial reconstruction surgery, Alloderm had to be used because I did not have enough skin. During the fat grafting procedure, I had liposuction done on my stomach so they could emulsify the fat and inject it into the breast. On average only about 50%-60% of transferred fat takes to the new area.

Overall, my prognosis is very good, according to my medical oncologist, Dr. Mounicka Mandadi. I have to get mammograms and an MRI every six months to watch and see if there are any changes in my right breast. I keep a check on my remaining nipple daily to make sure there are no changes.

Cancer not only affected me but my whole family; my husband and two small children especially. My husband is a medically retired Army veteran who currently works at the Post Office. He has been my rock through this. My sons, Ethan, 9 and Vincent, 5 have each dealt with this in their own way. Ethan threw himself into school; he’s on the academic team, makes straight A’s, has had perfect attendance, all but the day I had my mastectomy in March, and he has wrestled for 5 years, so his focus is on that as well. Vincent who’s 5, is special needs. I’ve had to handle my cancer and take him to his therapists and specialists at Vanderbilt University throughout the course of everything. He only knows that “Mommy had surgery.” If it weren’t for my husband and kids, I’m not sure I could have done this. Cancer doesn’t just affect the individual; it affects the family.

Paget’s disease of the breast is misdiagnosed due to the fact that it presents itself in a way that resembles eczema. Unless the physician is familiar with the disease, they do not know what to look for. It does not show up on a typical mammogram or ultrasound. It took a breast MRI with contrast for my Paget’s and DCIS to show up. Paget’s is almost always accompanied by a secondary underlying breast cancer. The symptoms of Paget disease of the breast are often mistaken for those of some benign skin conditions, such as dermatitis or eczema (1–3).

These symptoms may include the following:
* Itching, tingling, or redness in the nipple and/or areola
* Flaking, crusty, or thickened skin on or around the nipple
* A flattened nipple
* Discharge from the nipple that may be yellowish or bloody

“I was given this journey because God knew I was strong enough to handle it.”