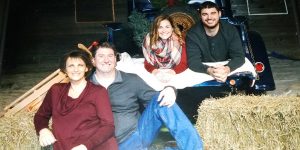 At 27, I was diagnosed with breast cancer, BRCA gene, HER2-positive, Stage 2. So I went through 8 rounds of aggressive chemotherapy and 35 rounds of radiation, a double radical mastectomy, 2 reconstruction surgeries, and a total hysterectomy in a year and a half’s time. Every doctor assured me it wasn’t cancer, but we kept pushing until we found an answer, and when we did, it was a major shock to all of us.

For seven years, I was cancer free. After I made the 5 year mark, I thought I was good to go. But after a revision breast surgery, I contracted a staph infection and was admitted to the hospital for 15 days, where they found cancer in my right lung. After many pokes, 2 breast surgeries and Talc powder in my lung, I finally went home to my family.

Nine months later, after many trips to the ER and severe pain, I was told I had liver cancer. Back to chemotherapy and more doctor appointments for the next year and a half. Only to find out 6 months later, I had it in my right femur, so we would start with a chemotherapy shot for the bone.

After many months of finally feeling like I was gonna be okay, I started having nausea and headaches, so I had a brain MRI, only to find out there was a tumor on the left side. So I had spot radiation, and it was gone. I was so relieved, since that was one of the cancers I was most terrified of having. I was pushing forward now to live life to the fullest with my family and friends. I was so happy.

My liver was giving me so much pain, I ended up having the Y90 procedure, and it killed 10 tumors in the liver, leaving 3 very, very small ones. I once again was feeling great. All the news was coming back good. A re-check of the brain was clear, lung and bone cancer were stable. I was feeling so positive, only to be knocked back down again with a tumor on the right side of the brain now. Once again, I had spot radiation, and as of my last checkup a week ago, it’s clear.

I just had a check-up a few weeks ago for the liver cancer, and it’s back again and a little more aggressive than before. But I’m on a new chemotherapy pill and really using essential oils now. My faith and positivity will keep me going.|

You would think after hearing seven times that you have cancer, I would be numb, but I always just think, “OK, WE GOT THIS!!” I have moments of tears and anger, but I wipe those away because those aren’t what is gonna get me through this fight. It is my attitude to get up and show up to keep rolling on this journey.

I believe prayers and positive attitude help me keep this journey up. I don’t know what my purpose is yet, but I won’t give up on finding it, and if I can tell my story to make someone keep the belief up, then I will tell it every day if I need to. Have a blessed day and much love to all.