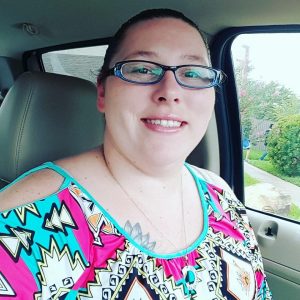 Finally getting a diagnosis. I started my period in 8th grade at age 13. It did its thing, then a couple of months later, I got my second one. From age 13 to now, age 31, my periods were never consistent. My weight fluctuated in high school between 150-180 lbs. I talked to my doctor about it, and he told me that my periods would eventually regulate themselves. I was on and off birth control. Pills made me super moody, I ended up being allergic to the patch’s adhesive, and the doc was afraid that Depo would cause me to hemorrhage. I ended up using the NuvaRing when I went on birth control.

But even with birth control, my periods were still irregular. When I was 21, my dad passed away from cancer, and I didn’t get a cycle for 2 years. I talked to doctors and was blown off for being “emotionally stressed.” Their solution was Provera, which I didn’t take because they did no testing. I gave up talking to them about it and went from 150 pounds to 250 pounds within 2 years.

When I got married in 2012, I went to a fertility specialist, and they did a plethora of testing. In May of 2012, I was FINALLY diagnosed with PCOS. I started infertility treatments with the specialist, but I ended up getting frustrated and depressed. I took 2 years away from it and just didn’t deal with any part of my PCOS.

In 2015, I restarted seeing a specialist–a different one that I like much better! I came back positive for HPV strand 16 and ended up with having a LEEP procedure done, along with a bunch of tests. I took Provera monthly, along with Femara–a drug that’s similar to Clomid, but its primary use is for breast cancer prevention in the opposite breast.

After a year of medication adjustments, ultrasounds, labs and seeing a weight loss specialist for 4 months, I got pregnant in November 2016. A positive test was taken in December 2016.

Don’t let doctors tell you there isn’t anything wrong with you when you don’t feel right. I may never get rid of PCOS, but I’ve learned how to control it and not let it control me.