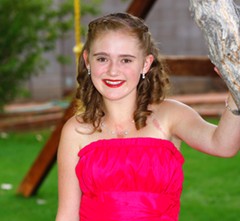 This weekend I did what the average teenager does over the weekend. I went to a surprise 18th birthday party for a friend of mine, and then the next day I went shopping for a prom dress with my friends. While I enjoyed being able to enjoy the ”normal” teen life, there was an incident that happened that I’d like to share with you all. At the birthday party, I was sitting with a group of girls – there were 4 in all with myself included. The conversation was going well and we were all laughing about some joke someone had said when a girl in the group – we will call her “Not-So-Sensitive-Girl” A.K.A. “NSSG” – asked me a personal question. “Becca do you wear push up bras?” asked the NSSG.  I thought this question was a bit awkward to be asking period, let alone at a party, with other people listening. Blushing, I responded with

NSSG nodded a bit at my response; supposedly happy with my reply. But then she commented:

“So you don’t mind drawing attention to your scar?”

I have had people ask me questions about my scar (that I have gotten from having open heart surgery to try and correct a heart defect that I was born with) all the time. ‘How did you get that?’ ‘Does it hurt if I touch it?’ ‘Will it get better?’ Or even the occasional ‘Can I touch it?!’ But I have never had someone ask me if I was comfortable with “drawing” attention to it. NSSG pointed to her own chest and drew a line with her finger; clearly indicating where the scar on my body is (in case I didn’t know!) and kind of chuckled at her un-sensitive question.

First off, let me say; I have never had to draw attention to my scar. It draws attention all on its own! Secondly, I know where the scar is on my body; thank you very much. And thirdly, I consider myself someone who can laugh at themselves. I will make fun of myself; I will even make fun of my own voice (that is deeper and raspier than most girls) and sing horrifically on purpose. But there are some “jokes” that you should never ever say to someone. So what did I say to NSSG? I chuckled and just shrugged before replying:

“Well at least with my scar I can assume that guys are just looking at my scar instead of being pervs and looking someplace else.”

This got a good laugh out of the group of girls, including the NSSG. But I really wanted to say: “Why would I mind drawing attention to it? I’m not ashamed of it. It’s part of who I am. It saved my life.” But instead of confrontation I decided to just brush it off.

I still don’t understand why people say the things they say. Maybe they aren’t thinking before they speak. I’m not sure, but I do know that I want people to realize that words; even if you don’t mean them in a rude or nasty way, they can and do hurt people. And they do make people feel uncomfortable and sometimes even ashamed of not only themselves but their own body.

While I would be the first person to say ‘Oh she didn’t mean any harm by it and she just wasn’t thinking before she spoke’, I don’t think this was the case with NSSG. She and I have had a few problems in the past week or so (I will not go into specifics), so I can’t help but think that perhaps this girl was trying to hurt me. Trying to get some type of negative reaction out of me.

But she didn’t. And she won’t, and neither will anyone else who tries to verbally assault me about my health, how my voice sounds and how my body looks. I have fought to live and the scars on my body are literally battle scars that I have gotten during my fight for life.

Sometimes, I don’t like how my body looks. There are times when I wear a bathing suit in public and I can’t help but feel insecure when I look at all the girls who have chests without a bright pink scar going down the middle. But I have grown to accept my scar and how my body looks. It has taken me a while to get to where I am today. Do I like my scar? Heck no. But I am glad I have it, because it
means I am alive.

My mom has always told me: “It’s what’s on the inside that counts.” And growing up it was always hard to really think good thoughts about myself, especially with the media and our society pushing it on girls that they have to look a certain way. But now that I am older, I can finally see that I am a pretty girl, both inside and out, and yes even with my bright pink, bumpy scar. I am much more concerned, however, with who I am on the inside and I think if people focused more on that, this world would be a way better place.

To the people out there who have something that they dislike about themselves physically (and let’s face it, everyone does!), you are beautiful. Don’t ever let anyone ever tell you otherwise. If I can look at myself in the mirror every morning and smile to myself and feel confident wearing a low cut shirt to a school filled with narrow-minded, harsh and judging kids, then you can feel confident with
yourself too.

When I came home and told this story to my mom, she told that I should share it with you all. She said it would be good to spread awareness about being sensitive towards others and what he/she are going thru. While I completely understand five year olds
coming up and pointing to my scar and saying ‘Wow that’s weird looking’, I don’t think its appropriate for people over the age of eight to be saying that to people about their physical appearance. So parents, please teach you kids about sensitivity towards others. And to the adults who are reading this, please remember to exercise sensitivity in your daily life.

I’d like to ask you guys to share your story/stories about a time when perhaps someone was not sensitive to you or someone you know about his/her physical appearance. How did you handle it? What did you say to them? How did it effect you?

We Are All Beautiful,