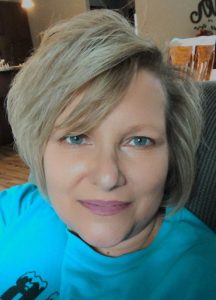 In 2007, I found a lump and went in and had a biopsy done. It came back as benign. I’ve been getting mammograms nearly every year since my late 20’s /early 30’s because of family history. So, in 2016, I went in October for my annual mammogram and there was another spot that was labeled as a calcification. The radiologist came in and said we should biopsy it, but I should not worry because it was most likely benign. So, due to scheduling I waited until December to have a biopsy done. It came back positive for breast cancer. Then, we scheduled a lumpectomy to get that bad boy out of there. I asked the surgeon if he wouldn’t mind removing that lump that has been there since 2007 since I still can feel it and it bothers me. He said it would be no problem to remove the lump.

After the surgery, the surgeon came in and informed me that the original lump was also all cancer and that it had traveled to lymph nodes. So I went from stage 1 to stage 3, because I was misdiagnosed for nearly 10 years. 10 YEARS!!!! Can you even believe that? Well, needless to say, I decided that I wanted to live and I got my family together and we moved to another hospital/clinic. I blame myself for not insisting that it be readdressed over the years, but I believed my biopsy results. Why wouldn’t a person? I’ve been doing a lot of thinking and I realized that I am on my SECOND round of cancer now. I had the misdiagnosed cancer lump from 2007, and then the calcification cancer further in my breast from 2016. Thank God that I got cancer again and they finally diagnosed my original cancer. I am three and a half years cancer free now.