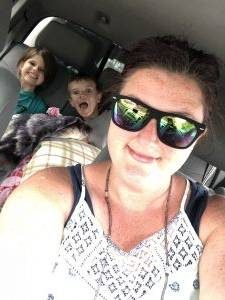 February 2018, I was diagnosed with stage 1a uterine cancer at the age of 32.

For two years, I was fighting pain and heavy bleeding, going to the doctor and them not finding anything and just telling me to get on the pill.

I had had enough, so I sought out a new doctor. During our first appointment, he said “here are your options”.

I have options other than the pill? I opted to go with an ablation.

I have two wonderful children and didn’t plan on anymore. For this procedure, I needed an ultrasound to make sure nothing else was causing the bleeding.

During the ultrasound, my doctor found a polyp on the left side of my uterus. The plan was to get the polyp before the ablation. After the polyp removal, it would be sent out for testing. My doctor told me it was just for testing and that he did not feel that it would come back as anything due to my age (32) and health (healthy and active).

I just so happen to have won tickets to meet JoJo Moyes, the author, and was headed to the book signing. On my way with my best friend, my doctor called to give me the news.

He was completely shocked. He had to call the pathologist to confirm the diagnosis.

I was numb, didn’t know what to think.

Me? Cancer? How does this happen?

I was one of the 3% of women my age and health to have uterine cancer. The criteria for it is someone over 70, without children, and overweight.

He wanted what was best for me and sent me to one of the best gynecological oncologists in the area. During each step of this, he would always say “if you were my daughter” ( I am his daughter’s age).

I couldn’t ask for a more caring doctor.

The following week, I had my first oncology appointment and was scheduled for surgery the next week. Everything went so fast, I feel like I really didn’t have time to process what was happening. I still feel that way five months later.

After my surgery, I felt like I got off easy with my stent with cancer. When I would go see my oncologist, I would see people there who had been going through chemo and radiation, and all I had to do was get my uterus out and essentially I was cured of cancer.  Some people have had to fight for years.

I am working on this. I know that cancer is cancer no matter what kind or how long.

I am so grateful for how everything happened; how something higher than me pushes me to seek help elsewhere, how the capable doctors and ultrasound technician helped find my polyp, and for my oncologist whose hands were steady and sure.

I am a survivor, no matter how long.