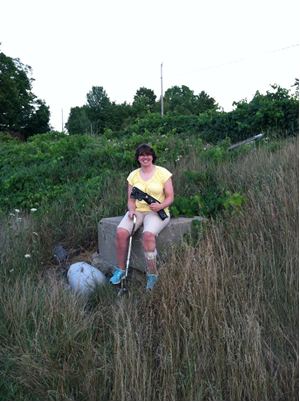 On June 5, 2011, I was involved in a motor vehicle accident that changed my life forever as I knew it. The accident occurred while my mother-in-law and I were returning home from a trip to Oklahoma back to New York State. I had driven all night and we stopped for breakfast in Ravenna, Ohio with my parents around 8 am that Sunday morning. I was asleep in the passenger seat at the time the wreck occurred in West Springfield, Pennsylvania at approximately 10:30 am. It happened on Interstate 90. No cause could be determined by a forensic mechanical engineer hired by my insurance company to investigate for one year. All I was told is that the car had veered off to the right within a quarter of a second and struck the concrete base of a light pole head-on into the passenger side at 70 MPH.

I suffered a crushed left ankle from the engine block coming up into the passenger side and striking my left foot and turning it around by 180 degrees which my doctor and nurses referred to as a partial amputation. I also suffered a broken left arm, four broken ribs, a broken back at the L1 vertebrae that damaged my spinal cord, a lacerated liver, a ruptured bladder, and a shattered pelvis. I had to be cut out with the ‘Jaws of Life’ and airlifted on a medical helicopter to HAMOT Medical Center in Erie, Pennsylvania. While on the helicopter my heart stopped three times and I had to be resuscitated.

Once I was taken to the trauma center they inserted a coil embolization into the artery in my pelvis to stop the hemorrhaging, as I was going into shock. I also suffered an intracranial hemorrhage and I received a burr-hole craniostomy to help relieve the pressure. All told I received 24 units of blood. Receiving this blood saved my life! I spent four and a half total months in the hospital. I received physical therapy (both in-home and outpatient) for the next nine months then immediately hired a personal trainer to increase my stamina and balance. I am now walking without a cane and climbing steps without a cane.

Besides my AFO brace on my left foot and my noticeable limp, no one would ever guess anything was wrong me and that is the way I want it to be from now on. I know that goal is within sight if only I keep working at it!