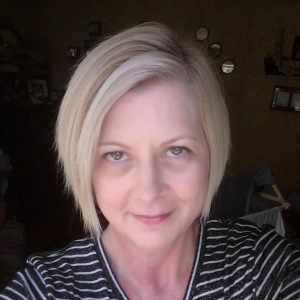 In 2012, while having an MRI of my neck and spine, two tiny nodules were discovered on my otherwise healthy thyroid.

One month after my first two surgeries in 2012, I needed a third surgery to remove the excess tissue left behind so I could have the radioactive iodine (RAI) to ablate remaining cells. Unfortunately, a small piece remained, but it was too large for further treatment, so I went for a second opinion at Sloan-Kettering. I was told my tumors were microcarcinomas, so I was considered “low risk”, and didn’t need RAI, or more surgery! What a relief, right!?

Fast forward to December 2016, and a new nodule appeared. The biopsy once again was indeterminate, but this time it was sent for further testing, revealing a mutation–BRAF v600e. I was no longer low-risk stage 1, now I was high-risk stage 3. This nodule was nestled very close to my carotid artery. Surgery wasn’t something I wanted to go through again and was it was proving to be difficult, so I prepared for RAI.

I needed to go off my thyroid meds for 6 weeks which made me severely hypothyroid and feeling awful; probably the worst I’ve ever felt in my life. I wasn’t allowed to drive, so I needed to arrange for rides to and from the hospital–I felt like a slug.

I needed dosimetry to calculate my exact dose for my treatments.   Dosimetry is a series of whole-body scans (WBS) and blood work given for a week. My teeny nodule wasn’t cooperating and wasn’t absorbing the iodine as expected, so I needed a higher dose of RAI.

In April 2017, after several weeks preparing on a low iodine diet and no meds; I had 243 mCi of RAI. I had to remain in the hospital in isolation for 2 days, and then other 2-1/2 weeks at home after that. I have multiple cats, and just being near me can affect their thyroid so I couldn’t be near anyone living for a long time.

In April 2018, at my 1-year follow-up appointment, I was shocked to hear that tiny little nodule was still there! I am resistant to RAI! I had my fourth surgery in July 2018, to remove the teeny nodule. It was attached to my recurrent laryngeal nerve.

I recently had my 1-year post-op follow up, and unfortunately, the numbers show another recurrence. I will most likely have alcohol ablation once it’s large enough to ablate. The damage to my salivary glands from the radiation is permanent, and I cannot have any more RAI.

I hate having to tell my entire story to be taken seriously. Two words that do not go together are, “good” and “cancer.” Thyroid cancer is often described as, “The good cancer.” There is NO such thing as, “The good cancer.”  It’s also not the easiest to treat, or if you could choose which cancer to have, choose thyroid cancer. No–stop saying that! I’ve had 4 surgeries, a hefty dose of radiation, and I am not done yet. My cancer is very real, and treatment is ongoing. I believe this thought process is why people aren’t as supportive as they could be.

Cancer is cancer. Mine is very real and it has changed me. I’m more compassionate, more empathetic, more patient, and more supportive.

Finding the correct replacement medication takes a while. Living without a thyroid, we must take a little pill every day. Finding one that works, and the correct dosage can be challenging. It’s important to find a doctor that also treats you based on how you feel, not just what the labs indicate. I do finally feel as close to normal as I can be on my current dose. For me, fewer fillers are better.

My daughter is a junior in college and wants to make a difference in this world. She is studying biomedical engineering and is heavily involved with Relay for Life for the past 6 years.

Cancer is doing its best to define me, but I won’t let that happen. I suggest to others that they join support groups.  Those people know what you are dealing with and can help you understand what to expect. Don’t be afraid to ask for help. I’m a caregiver, along with my husband for his mother who suffered a stroke 3 years ago. We need help too sometimes.

Life can be overwhelming. Sometimes the most help comes for those you least expect it from, and sometimes, that support has paws!