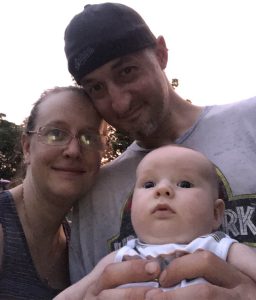 I’m a true fighter as some would say. I’m a divorced mother of 4, with an amazing fiancé: We share a 2-month-old little ‘rainbow” baby boy.

I kept a regular schedule at my OBGYNs for check-ups and tests. Six years ago, on my 34th birthday, I had my usual exam and received the results back in about a week. The tests came back as LGSIL and that meant another colposcopy. I waited the normal week for the results to come back but this time they were different, and I was asked to come into the office. Now I’m scared: I felt like I was the kid going to the principal’s office. My doctor is awesome: She knows how to make you feel good even with the not-so-good news. She tells me that there is good news and bad news. I asked for the bad news first. She said, “Well, you had cancer.”  I say, “What?” in disbelief and asked her, “Had?” She said the biopsy showed precancerous cells that didn’t show in the PAP test. One of the tissue samples showed a very early stage cancer cell. I asked her if that was it and was this the only spot? She said, “Yes, and the good news is that you don’t need treatment. Just repeat your Pap test in 6 months and have a colposcopy test.” Thankfully the Pap and colposcopy came back negative.

Unfortunately, I was already dealing with the fact that I have HPV (I contracted from my now ex-spouse who cheated on me and ultimately gave me this infection that made me sick).

Fast forward 4 years: My daughter is 16 and is diagnosed with Postural orthostatic tachycardia syndrome (POTS) and because they said it is genetic, I was tested. The test revealed I have POTS as well.

I gave birth to my “rainbow” baby boy on May 6, 2019, and never thought anything would be wrong. I had him VBAC (Vaginal birth after cesarean section), I know, I was crazy and wanted to try it–LOL.  At my 6-week postpartum check-up, I had my regular Pap test. I thought it would be normal and I’d have no issues; I wasn’t worried one bit.

Five days later I received a phone call (the delay was because it was the weekend) that my Pap wasn’t normal. I would have to get a colposcopy again (by now I am a pro at these things since I’ve had about 6 or so). I got the biopsies done and received a phone call a few days later and it’s not good news. Both the Pap and colposcopy show that I have HGSIL (precancerous cells) and will now have to have a LEEP (Loop Electrosurgical Excision Procedure) to remove part of my cervix and keep me cancer-free. My fiancé wants to have another baby so my OB will try to take only as much as is needed so that we can try for another child. I have never been this scared in my life. The pretesting is probably what’s getting me but it’s also the thought of “what if?”

I now think of “What if?” in a different way. I think of it like, “What if they made the HPV shot for older women too?”

God has seen me through some tough times. He was there when my 11-year old was born purple because his cord was around his neck and then a few days later when my Mom was diagnosed with Mantle cell lymphoma (a B-cell non-Hodgkin lymphoma-NHL). God was there again when I lost my daughter at 14-wks gestation and then again when my Mothers cancer had returned after 10 years of remission. He is with me now as I fight again. I’m may not have cancer this time but I’m not going to let this hold me back or upset me.

I am a firm believer in prevention. You can protect your child from developing certain types of cancers later in life with an HPV vaccine. Maybe there will be a day when there will be shots available to prevent the rest of these cancers because we need more survivors.