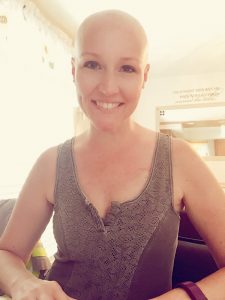 On my 43rd birthday, I rolled over in bed, and it hurt. Not thinking it could be anything, I did a self breast exam, and sure enough, I felt a lump!

Ironically, I had my yearly gyno visit the following day. She confirmed it was indeed a lump an encouraged me to get a mammogram ASAP. I was scheduled for a mammogram 3 days later. When I got there, they did the breast that had no lumps in it first, then the one that had the lump. They asked for more slides of this breast because the radiologist wanted to look further into it. So he did an ultrasound as well.

After the findings came in, he talked to me and asked if I would be willing to have a biopsy right now. He said that he could tell by the ultrasound that it was not a cyst but a mass. I knew this could NOT be good. Trying not to panic, I agreed to the biopsy (Which hurt!). I tried not to cry, but when I left the hospital, my husband was driving and he reached out for my hand. The tears just rolled down my cheeks. Somehow I just new it was cancer!

Five days later, my thoughts were confirmed when I was told, “You have breast cancer.” I went on to have a port placed, which collapsed my lung, to 12 weeks of Taxol chemotherapy, to losing my waist length hair, to 20 rounds of radiation, to now being on hormone blockers. I never gave up once, as now I have numerous doctor visits scheduled, and a full head of hair regrowing!

I always stayed positive, despite the circumstances. I smiled every day and thanked God for waking me! He continues to be the biggest healer in my life, as I do not know what my future holds. All I know is that cancer has changed me into this different being, who appreciates life so much more and who doesn’t take a single day for granted.