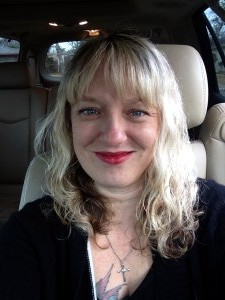 On Nov. 12, 2014, I had a simple hysterectomy with the removal of one ovary after having several years of problems unrelated to cancer. Two days later, I received a call from my doctor that the pathologist had found endocervical adenocarcinoma.

The doctor explained that the reason it was never found was because it was so high up in the cervix that it was undetectable with a normal Pap smear. So thank God I had the hysterectomy.

She said that they would be sending my slides to Baylor University for staging. Apparently that’s the process. She also said there was a chance that it could be wrong. So we patiently waited for almost a week to hear if I did indeed have cancer.

On Nov. 20, also my mom’s birthday, we received the call that I did indeed have cancer and that it was stage 1B. 1 meaning it was isolated to the cervix, B having to do with the size. I would need to be referred to an oncologist specializing in gynecology.

After having to deal with recovering from surgery and the fact that I had cancer, I now was going to have to deal with insurance issues and who I would be able to go and see. I got in with Texas oncology in Fort Worth with a doctor named Noelle Cloven.

My first appointment there was Dec. 9. This gave me several weeks to worry, obsess and read lots of crap on the Internet. But luckily my husband’s sister is an oncologist in another state and was able to help us tremendously with lots of questions in the meantime.

So my first appointment with Dr. Cloven went really well. She explained things thoroughly and laid out our options. Our options would be 1.) A big nasty surgery, parameter tony or 2.) Skip surgery and go straight to radiation and chemo therapy. So basically we had a big decision to make. Both the options were equally successful. My biggest decision was whether to have the surgery and risk needing both surgery and the treatment or just going straight for the treatment.

Dr. Cloven suggested we go home and think about things but get back with her within a week. I wanted to run things by my sister-in-law too. It was decided that the next best step would be to have a PET scan. It could help me narrow down my decision. So I had my PET Scan and got the results… Looks like I’ll be starting chemoradiation next week. I’m pretty scared but ready to fight like a girl!