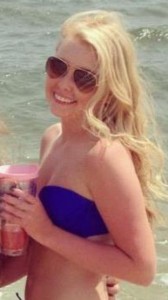 Like many, my story begins with a series of symptoms that could be linked to a handful of average ailments: fatigue, body aches, swelling, and the occasional purple hands and feet. At 12 years old, your first instinct isn’t that you may be suffering from what would become a lifelong battle for your health, but rather just a passing “bug” that could easily be fixed with a simple antibiotic. It was the beginning of my 7th grade year, and being the social butterfly that I was, it was chalked up by family doctor as a severe case of mono. Although I had tested negative several times, my whole field hockey team was dropping like flies, so I was treated accordingly. And in a week’s time, I had begun to feel somewhat human again. I continued my social life and maintained a steady/normal-paced lifestyle for a few weeks more until the same debilitating symptoms hit me again, this time twice as bad as before. I had noticed that the tone of my skin had changed from its usual porcelain glow into an assortment of blues and purples.

After a ton of doctors and a few trying months, the week after my 12th birthday, I was anointed as a member of the “butterfly club” ( just a cheerier way to say victim of SLE). Living in a rural area, the nearest high-end medical facility was nearly 2 hours away, which is where I spent a majority of my adolescence learning the ins and outs of the beast. While my friends were learning the meaning of a square root and the presidents of the United States, I was learning the difference between a 16 and 18 gauge needle and how to balance the extra 10 pounds my high doses of prednisone had caused. Teenage years are hard enough to deal with being perfectly healthy, but add the fact of missing anywhere from 25 to 50 days of school a year. Maintaining a social life soon became ridiculous to even think about. After mornings of not being able to dry my hair because of such severe muscle spasms and summer nights where sandals only became a showcase for purple toes rather than red polished ones, I learned little tricks to cope with the constant questions that arose among my peers.

After high school, I started working for county government agencies part time, and after much deliberation between school and full time employment, I decided to dedicate myself full time and started my current position as a Deputy Clerk for the local Circuit Court. Shortly after full time employment and completely engrossing myself in public service, one of the lovely aspects of my hands on career hit me hard: a respiratory virus that had been passed around the community. After a few days off and a course of antibiotics, nothing seemed to be helping. My family physician decided I should go to the local hospital to test whether what I had was viral or bacterial, and that is where all hell broke loose. I got blood work done as usual and within thirty minutes, I had been called back into the doctor to be told, “After reviewing your blood counts, you seem to have the markers of Leukemia.” By this point in life, there really weren’t many medical terms you could throw at me that scared me. Cancer, however, was a different story. After a flow cytometry test and a long 6 days of waiting out my oncology appointment, my fears were soon put to rest, and a new course of action was put into play.

Seeing that I was 19 years old, my oncologist, as well as my family, agreed maybe we should take this to the best of the best, Johns Hopkins in Baltimore, MD. My blood counts baffled every physician I came into contact with, with a WBC of 1.2, HGB that stayed around 5.3, and a new diagnosis of hemolytic anemia, my ability to function at a normal capacity turned a many a head among my “dream team” of physicians. After deliberation among the team (and yes, I mean team), 2 rheumatologists, an oncologist, a hematologist, a gastroenterologist, and a physical therapist, I was finally on the road to recovery, or so one could hope.

Previous to being blessed with such amazing doctors, I had my long time rheumatologist, who I had been a patient of since diagnosis. In comparison to my level of care being received at the time,I realized that she had really just “winged” my course of treatment using high doses of methotrexate, CellCept, and prednisone as a crutch to make the numbers better temporarily. The whole time, while she was using such powerful drugs in such high doses, my liver was the one taking the blow. When I arrived at Hopkins, my liver counts looked like those of a lifelong alcoholic, and to this day I still battle the repercussions of her wreck less “care plan.”

At this point in my disease, I am currently on the verge of either a breakthrough or breakdown. My counts seem to have a mind of their own, and what the SLE doesn’t think of, the Hemolytic Anemia seems to. Oral chemo, blood transfusion, IV treatments, liver biopsy, the worst of doctors, the best of doctors, you name it, and I’ve probably been there. They say that God will only give you as much as you can handle, and after meeting women who go through a daily struggle with illnesses like this, we all seem to have one thing in common: we are generally a “glass half full” kind of breed. When good days are limited, you have to make the most of each and every one you are blessed with. I do not wish this beast upon anyone. However, I wouldn’t trade the lessons it’s taught me, or the strength it’s given me, for a thing in this world. — “Stay strong. Make them wonder how you’re still smiling.”