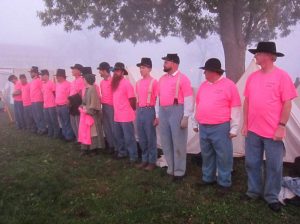 I was diagnosed with breast cancer in 2014 and here is my long story.

I found my lump when I was 21 years old, and had finished nursing my son. I went to my doctor and he told me not to worry about it because I was too young. At that age, it’s common to think the doctor knows best. Fast forward 19 years, and my doctor that I am seeing now sent me in for my first mammogram regarding that lump. The test came back unclear, so I was sent for an ultrasound. That also didn’t give them the best read on the breast, and therefore I was sent for a MRI with contrast. After that, they finally agreed to do a biopsy. The surgeon that did the biopsy had to reschedule my appointment for my test results due to being tied up in surgery. As a courtesy to me, he didn’t want me to waste any more vacation time because he couldn’t make my appointment. I went in two days later on my way to work and got the news. I was told that I had stage 2 breast cancer. It was a horrible day with  going to work after hearing that news. I made it until about 3pm that afternoon and had to leave. I needed time to process.

I had my surgery scheduled for a lumpectomy because I wasn’t ready to have a mastectomy. A week went by after that appointment, and I was informed that it wasn’t certain that they had clear margins. I was then given the option of another lumpectomy or a mastectomy. I chose to do another lumpectomy because I still wasn’t ready to have a mastectomy. The results came in 10 days later, that was a really long week and a half, and it turned out that I had to have a mastectomy after all. The doctor, my boyfriend and I all sat there crying a bit. The doctor comforted me and told me that I gave a good fight. So, I was scheduled for a single mastectomy on my right breast a week later. The day that my surgery was scheduled for was also my parents’ wedding anniversary. My mom told me that I gave her the best gift ever by being healthy! I did not choose to be rebuilt on my right side. However, it felt like the right decision for me.

I was lucky enough not to go through chemo or radiation. I did take Tamoxifen for 8 months, but that was making me so sick. I couldn’t eat or drink anything without it coming back up. My oncologist told me that it was my diet making me sick, but I was not eating because nothing was staying down. After about 6 months of Tamoxifen, I started to develop serious uterine pain. I had developed an infection in my uterus due to the uterine ablation that I had the previous year. So, I decided to have a total hysterectomy. If they were trying to suppress the estrogen, why not remove it. That is when I decided to fire the oncologist because he told me if I went that route I would get cancer again. Now, I have a new oncologist that supports me and tells me how great I am doing.

In 2018, I had a re-matching procedure done. My mastectomy scar burned and itched to where I had no relief. I was told that I could have the scar opened up and cleaned up to remove any of the scar tissue. When they did that, they reduced my remaining breast to help with back pain. They told me they removed about two pounds of tissue from my chest. That seriously helped my back out. Since that surgery, I haven’t had any pain in my scar.

During the time of my surgeries, I still went camping with the Civil War group I belong to. I didn’t do as much when I was there, but I still showed up. One person asked me why I was there instead of home and I answered simply, “I could be home and miserable, or I can be out with my friends where I would be distracted from my discomfort.” When we were at an event, two weeks after my mastectomy, the unit surprised me with the Pink T-Shirt Brigade. That is true love and support right there.

Through the whole time, I found humor, my pets, my family and friends to be the best medicine. 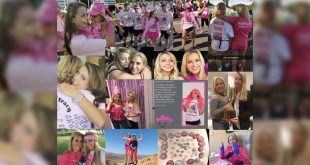 At 12 years old, my life forever changed when I received the devastating news that …