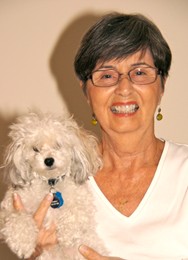 In brief I was born with polycystic kidney disease and began suffering symptoms when I was in my late teens. The cysts are in my kidneys and liver which caused both organs to be enlarged. When a cyst itself enlarged and became engorged with blood or infection they became extremely painful. Eventually they would rupture and cause internal bleeding for which the only “cure” was to lie flat on my back for weeks at a time. I once figured out that if I added my “down time” all together out of 16 years in my twenties and thirties I spent an entire three of those years flat on my back in bed and/or on the sofa trying to get the bleeding to stop. It was disabling and caused me to limit and exclude many activities I wanted to do and it also meant that I couldn’t wear many types of clothing that I wanted to wear because I could have nothing touch my waist – ever. It would cause the cysts to act up and bleed if I did.

In spite of all of this my husband and I did adopt ( because we didn’t want to pass this hereditary disease on) and raise three children who were hard to find homes for. Two were of mixed race and one was an older child. All were and are a blessing to us!

At the age of 36 I lost my kidney function entirely and had both kidneys removed in two separate operations. I was mighty glad to be rid of them, too! After over three years on dialysis, I received a deceased donor kidney that lasted for 14 glorious years. In 2002, when that kidney rejected, my brother-in-law gave me one of his kidneys and both he and I are still going strong to this day. May God bless both of my donors and their loved ones. Since their generous gift and the removal of my diseased kidneys I have lived a pain free, active life.

Yes, it’s often been a tough fight, many times I found being so ill during my young years to be extremely isolating. There are now serious side effects from my medications that cause me problems and my transplant won’t last forever but all in all I am a very happy, VERY grateful woman! Two months before I married my high school sweetheart at the age of 22 I was diagnosed with my disease and told that I would not live past the age of 40. Here I am today, married to the same man, with 4 grandchildren and am 63 years old!

Thank you for this website and FB page. How nice to have fellow “FIGHTERS” to share with. We’re fighters, we’re survivors, and we don’t take any moment of any day for granted because of it!!!