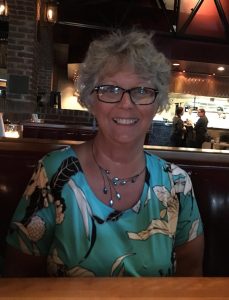 I had been going to doctors because I was not feeling well and decided to go back to the oncologist. The minute I told him what was going on, he asked, “Did you get these two chemo meds”? I said, “Yes.” He explained that there are women from that period of time showing up with lymphomas.

The next week there was lots of lab work and a bone marrow biopsy. During the follow-up visit to the doctor’s office, the doctor said, “I have good and bad news. You have mantle cell lymphoma, and you will be admitted to the hospital at 8 a.m. tomorrow.” I went to the hospital and the first thing I was given was a port, then a PET scan, then four days of chemo–I came home exhausted.

They said in one week I was to get an H&H (hemoglobin and hematocrit test). So, we did and by the time we were home, I got a call that my counts were very low, and I needed to come into the ER and get admitted.

Once I was admitted to the ER, a nurse came to administer meds. The nurse told me that the needle was used for universal ports. As she inserted it–I screamed–it felt like it came out my back. It turns out the needle broke. OMG–it was a horrible experience. Once I was taken to my hospital room, I ended up getting a pic line. After this hospital visit, I was sent home.

The following week I got my next weeks’ worth of chemotherapy. We had planned to attend a graduation party, but on this particular day, I had the chills. We checked my temperature (101), called the doc, and left for the hospital. I was laying on the backseat of the car and by the time we got there I had no idea who I was. My temp had gone up to 105.

I remember the doctors talking to me, but my head hurt so bad I could not open my eyes. One of them asked, “Is it okay to do CPR, and put a tube down to help you?” I said yes, then I opened one eye and saw my husband crying. It ended up being a blood infection, and I had to spend over a week in the hospital. I continued my chemo every three weeks for eight months. Finally, I was told, “You are in remission.”

In December of 2018, I got sick with bronchitis but thought I would get better. I went to my primary doctor, then a pulmonologist, etc. Finally, at the end of March, they did a bronchoscopy. I found out that the MCL was back in my lungs and all thru my chest.