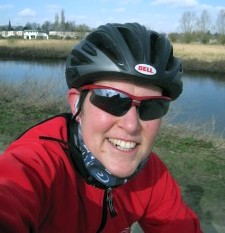 In May 2013, I was 35 at the time. I felt a lump in my breast. I rushed to my gynecologist to find out what it could be. After some testing, she told me that I had breast cancer. After further testing at the hospital, it became clear that it was invasive lobular carcinoma, and treatment was urgent. On top of that, the doctors also found a small tumor in my other breast.

I had chemotherapy, 6 heavy rounds. Because our wedding had been planned for months, we went through with it. Five days before my last round of chemo, I said “I do” to the man who stood by me all the time. It was a fantastic day in a very dark period.

After the chemo, I had surgery and radiation therapy, and I started additional hormonal therapy for at least 5 years. After the radiation therapy was finished, I started to ride my bike again, as it is my personal mental coach! A good bike ride gives me more positive energy than any psychologist ever can. In March 2014, I went back to work, putting the whole experience behind me.

Then in September 2014, I had a weird headache. I asked my doctor for a scan because, deep down inside, it felt wrong. The scan was taken, and as the doctor scrolled through my head on her computer screen, she told me that I had two brain tumors. Fortunately, they were quite small and treatable with a special radiation therapy. In the weeks and months after the radiation, it became clear that the therapy had really reduced the tumors to a point where they were no longer visible on the scan.

In February 2015, I had my reconstructive breast surgery, a 9-hour procedure. Now, five weeks after that, I am back on my bike with a great big smile on my face! Over the last two years, I felt so much support from my husband, parents, friends and family that there is no other way for me than to pick myself up every time and go on.

Over the last two years, I’ve stared right into cancer’s dark and scary eyes twice. And twice it had to turn away. I fight like a girl, and I WIN!