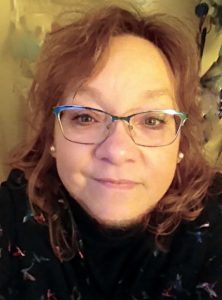 At age 50, I had never missed my yearly female exam. I complained to my doctor about a painful knot in my pelvic area and pain down my leg. They sent me to the hospital, where I had both trans-abdominal and trans-vaginal ultrasounds to look at the entire pelvic area.

My gynecologist never told me the results of this test. I should have had a follow-up pelvic CT scan without delay. In fact, this pelvic ultrasound that they performed on May 6, 2010, I showed a pelvic mass 9 cm diameter. I was in so much pain.

My niece convinced me to go back to my doctor. On March 7, 2011, I returned to my doctor. Another ultrasound showed the mass 13.4 cm.

MY STORY: At age 51, I was a divorced, single mother of two adult married sons. I arranged for a short-term six-week leave from work. My plans were to recover at my mother’s house and return to driving, to my apartment, job, church, dog, and generally continue with my lifestyle.

I would have a total hysterectomy. They scheduled me for what would be an expected three-hour surgery. During my 6+ hour surgery, my family was invited into a small room where my doctor told them I would most likely not survive the surgery.  I woke up in ICU; my two sons stood over me while my doctor explained that two other surgeons had also operated on me and I had cancer.

The tumor stuck to my colon and had pushed one of my kidneys closed. Over nine inches of my colon was removed, a stent placed into my kidney and a bladder catheter.

Sometime after midnight, I woke up and began trying to make sense of what had happened to me. The nurse allowed my sister to come to talk to me. As I looked at the outline of my sister beside me, I told her, “We have to pray.” I began to pray aloud. As I prayed, I praised God for saving my life, for keeping me alive. I told God that I’d place my feet everywhere he directs me.

In the months to come, I was in and out of the hospital, had chemo and lost my hair. I can’t even begin to tell you the amount of pain that I dealt with daily. One doctor said that I’d probably lose my left kidney, but God healed me and now both of my kidneys function normally. I experience ongoing chemo brain fog and it has caused a significant impact on my quality of life.

I never worked again and was placed on disability. I ended up having six more surgeries. I was able to move into an apartment in March 2012. I have been in remission since June 2014. I still have an IV chest port and I go to the cancer center every six weeks. I also have yearly hospital scans with a CBC blood test. I have eight years survival and I now have two granddaughters.