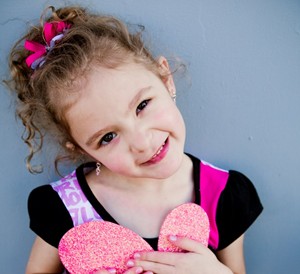 My high school sweetheart and I married in February 2002 at the young ages of 20 and
19. We decided a year and a half later it was time to start a family. It took 9
months of trying before we successfully conceived our first baby. She was born
Friday, January 14, 2005. Gabriella Joelle, a name so big for a 6 lb 2 oz teeny bundle
of pink.

For four years, Gabriella grew to be so vibrant and sweet and even became a big
sister to her brother Paul Jr in September 2007. A girly-girl to the extreme,
independent, strong-willed and sensitive. She went through all the typical cooties
kids go through, but was overall healthy. I made sure she was always current on
shots, ate healthy and made it to all her doctors appointments.

We went to her 4 year check-up, expecting for everything to be as it always is…. 90th percentile for height, 20th for weight, excellent speech and development, required shots and “see ya again next year”, but it wasn’t the case this time. Our pediatrician heard a heart murmur that he wanted to be double-checked by a cardiologist. He wrote us a referral and we got in for 8 weeks later.

March 18 2009 came and we went to the cardiology consult. The cardiologist listened to her, did a quick monitor of her heart to record the rhythm, and the cardiologist said he heard the same thing my pediatrician heard. He scheduled for us to go back and have an echocardiogram done on March 24, so that we did. There was something nostalgic as I watched all the different images on the screen. The little flicker on the screen we so anxiously waited to see nearly 5 years ago as she was growing in my belly was now this massive muscle, contracting and pumping and working- giving her life. The doctor sat down with me and went over the results of the scan, which were anything but what I had expected. She had significant enlargement in her left atrium, and he was failing to see a cause on the test. The best way for us to find out what was causing this was a cardiac catheter to be done. Another test.

The catheter was done April 24 2009. Our family gathered in the waiting room as my daughter went under anesthesia to have a catheter done. The doctor came out to tell us that they had found the cause of her enlarged heart. She had a coronary artery buried under her heart muscle, and as her heart pumped the blood supply was cut off. They call it Myocardial Bridging – and was rare in children. In partnership with that, she was diagnosed with another very rare congenital heart defect in small children, called Restrictive Cardiomyopathy. Her lower left chamber of her heart was stiff and not functioning, causing a backup of blood in her heart and making it enlarged.

May 11, 2009 our whole world changed. As my husband and I sat down to go over the findings of the catheter with the doctor, we expected to be faced with information on repairing her heart defect. The cardiologist said there was no repair for how severe her defect was and their suggestion for saving her life was “a new heart”. We hadn’t even considered this as an option, and it crushed our world in just those few words. Our child needed a heart transplant. Not only that, but we would have to move away from home to get it. We didn’t fully understand the magnitude of how this would change her life until we met with the transplant coordinator a few days later. She gave us the full rundown of the reality of it all. A lifetime of medications, constant risk of severe sickness to the smallest of viruses, probability of Lymphoma or skin cancer, chance that she won’t have children, and that we will face multiple transplants in her lifetime. A transplant is a replacement of one set of problems with another. BUT without a transplant, she will not see her 10th birthday. She was a walking time bomb, in constant risk of sudden heart failure.

Over the following months, we had her medical condition reviewed by multiple well-respected medical institutions to ensure transplant was in fact the only option. We were interviewed by the media to share her story. Fundraisers were thrown in her name to assist us with the insurmountable bills we will be faced with. I left my job to be able to keep up with her appointments and keep watch of her.

Through August 2009, we completed every single (daunting) step required to list her for a new heart. We went to Loma Linda University for her intake visit and spoke about the process in detail over a 3 day appointment. We were encouraged to wait in Arizona for the heart and to arrange air transport to fly there when we got the call, so that’s what we did. It took about a month, but on September 22, we met with and completed plans for air travel via a jet charter company. We had everything in line, including her Make-A-Wish trip to Disney World. She was to be active on the UNOS transplant list after her Disney Wish on October 15, 2009.

Instead, on September 25, 2009, Gabriella suffered a massive stroke caused by the stagnant blood in her stiffened heart. She collapsed that Friday morning during breakfast and I immediately called 911. She was flown to Phoenix Childrens Hospital where she would spend 6 days in PICU and another 2 weeks in rehabilitation. I would later find out she was so unstable from the stroke that the day she was flown in and had an MRI to disgnose it, she almost coded in the MRI room. The stroke took her right arm function and her ability to speak. After being discharged, Gabriella was on twice a day injections to aggressively break apart the clot in her brain, as it made transplant an unsafe option. She spent 4 months on twice a day shots, and 5 hours a week of therapies. She was finally cleared via MRI on February 5, 2010 for transplant, and was put on the UNOS heart transplant list February 11, 2010.

On April 14, 2010 we had a possible heart offer but got the call a few hours later it was not the one for Gabriella. We continued to wait and made another trip to Loma Linda for our monthly clinic appointments. Gabriella’s fateful day happened on May 17, 2010 which was day 97 on the organ transplant list. They took her in to surgery around 7:30 pm and the actual surgery itself started at 9:18 pm. Her new heart started beating in her chest around 11:20 pm – her “second birthday”. By 1:55 am her chest was closed and at 2:30 am she returned back to me, exactly 7 hours after I left her. Gabriella did amazing with the only complication being some irregular heart rhythms. She was extubated the next morning and the healing process began! After only 8 days in the hospital, she was released to our temporary and local home, the long term Ronald McDonald House. We lived there for 4.5 months during her recovery, visiting the hospital frequently for check-ups and one week long admission due to a nasty blood virus she got. We returned home on September 25, 2010 – one year after her stroke.

It is amazing how all of a sudden Gabriella does not have a list of conditions, limitations, and side effects. It seems like everything is so simple now – post-heart transplant, meds, steer clear of germs. Sure, to some that would be a lot to take on, but compared to the past and what we have endured, this is cake. Gabriella is doing amazing and there is nothing in the world I would trade for these moments with her.

Gabriella is my hero. She is the strongest person I know and has NEVER tolerated being down. It was hard on her, a constant struggle, but she never lost her will to fight. And I’ll give myself a little credit also, because I know I couldn’t have done this without my own little dose of strength. Gabriella and I compliment each other, we feed off of each others’ need to push forward. Divine planning.

We have learned so many important things through this journey and we have so much still ahead of us. First and foremost is to respect your kids and appreciate all they do. Just as we were not immune to such tragic news, no one is. Also, and probably the most obvious, is to register as an organ donor. You can’t take your organs with you, but they can give new life to someone in need. And finally, we have learned to rely on God for everything. Possessions mean nothing, your own plan for your future is uncertain, but God already knows the plan laid out for you. Being at peace with not fully understanding something or not knowing what the next step might be is truly the only way to really let God direct our life in the direction He wills. 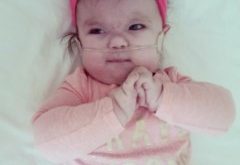 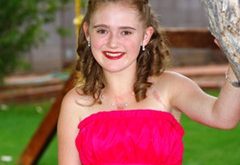 My battles haven’t ended and they won’t. I was born with a heart condition called …