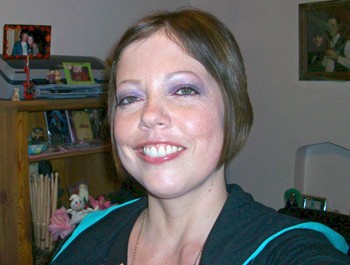 At age 45, I have battled cancer 4 times. My story with cancer began when I was 17 years old after a trip to the ER because I had the worst tummy ache of my life.  I had to be put through numerous tests that showed something I would later learn was known as a childhood form of a kidney cancer called a Wilm’s Tumor. I thought I was only going into surgery to have my kidney removed because it wasn’t working anymore without knowing why that had happened. After coming out of intensive care, one day in my room when I was alone, I asked a nurse if they found out what was wrong with my kidney – only to be told that I had cancer. She asked me if anybody had told me? I said NO! It didn’t really sink in that “I HAD CANCER” until I was being taken directly from that hospital to John Hopkins Hospital in Baltimore, where I lived at the time, to begin chemo. It was then that I realized it was indeed for real! It was very hard to go through as a teen, losing my hair, feeling so awful from chemo to where I lost 30 lbs, and other side effects that made life hard yet I made it through harsh chemo to beat the cancer then life went on as normal.

That was until I learned, at the age of 31, I had breast cancer after seeing a few different doctors for opinions on a lump I had that I felt was not right even after being told I was too young to have breast cancer and tests that were done did not show it until I insisted on the lump being taken out. I had a lumpectomy done, once they made the diagnosis, with harsh chemo again for 6 months then 33 radiation treatments to be in remission, thankfully, until a routine mammogram showed a suspicious spot in 2003 where immediately the same day the doctors performed a needle core biopsy to send off to find out what was going on. I learned about a week later it was another breast cancer issue this time in my right breast – the first time was in my left. I fought this one the same way with a lumpectomy,chemo and radiation. I had complications along the way yet somehow I miraculously made it through another battle with the demon known as cancer!

I never really let myself look back – only forward to better days & try to stay positive as much as I can. Long story short, in 2008 I went in to have my ovaries removed to prevent ovarian cancer because I had some genetic testing done and learned that I did indeed carry the BRCA1 gene which can be linked to both breast and ovarian cancer so my oncologist felt I should have the ovaries out! Much to the surgeons horror I already had ovarian cancer growing. I will never forget the day I got those awful words! All I knew was I had to fight it to live! IT has been difficult beyond words, as anyone who has gone through chemo/cancer can imagine, to hear you have cancer ONCE, so to hear that 4 times is unspeakable!!!

I thank my husband’s love and him being by my side for the last 3 battles, my sweet cat Polly whom I adore, and hobbies I stay involved in to take my mind off of the tough days, like music which is a HUGE, as well as my top passionate outlet, to escape to! 🙂 Reaching out to other survivors and just living life to the fullest by being adventuresome when possible, to do things I enjoy with my husband, seeing all of my daily blessings, and being thankful I am still here after 3 different types of cancer – 4 battles total. I am happy to do the things I love & make lots of memories with my family and friends I cherish! My advice to anyone going through a tough time is, when possible, make time for lots of FuN! 🙂