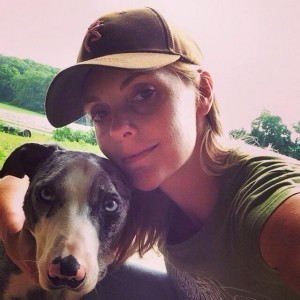 I am a 30-year-old newlywed. I’ve been married for just over a year, and in the last year, I have experienced things I never thought would happen to me. You hear stories of things happening to other people, but never expect to be the one writing a story about yourself. However, I have been through a lot. I’ve bounced back from a lot and am now about to embark on my fight with cervical cancer.

To begin, I was diagnosed with PCOS at the age of 16. This never really affected me too much. I worked hard to stay in shape and managed to maintain a very healthy weight my entire life, which ultimately has controlled the PCOS. Having PCOS, it was always in the back of my mind that one day, having children might be hard for me.

At the age of 29, my husband and I were excited to discover I was pregnant. However, before I could even get to my first prenatal visit, I had a miscarriage. I was devastated but thought, well this time it just wasn’t meant to be. Next time, everything will work out.

Six months after my miscarriage, I found out I was pregnant again. I was thrilled but weary of becoming too excited as I knew I could lose this baby as well. This pregnancy, however, started progressing normally and everything seemed to be going well. I went to a couple of prenatal visits, and my doctors were happy with my progress. At around 8 weeks I started experiencing bleeding and pain. My doctor told me to go to the ER to check in case it was a miscarriage or perhaps an ectopic pregnancy, but she doubted it was the latter. I went to the ER and had an ultrasound, and then my doctor showed up at my bedside to tell me she was very sorry but my pregnancy was ectopic. It was stuck in the right tube and had to be terminated immediately. I couldn’t believe it. I had heard ectopics were quite rare, and here I was, forced to terminate because if I didn’t it would kill me. They offered me chemo to terminate, which I took. However, a few days later, I was rushed into surgery because the pregnancy was not terminating. My angel baby left me on April 16, 2013.

I had a hard time recovering from that loss, and then in January 2014, I found out I was pregnant again. This time, I couldn’t bring myself to be excited or happy. Frankly I was terrified. The last pregnancy could have killed me and resulted in an emergency surgery. I called my doctor and told her I was pregnant. She had me come in the next day for an exam as I was considered at high risk. They took my blood every 2 days and scheduled me for an ultrasound at 5 weeks. My friends all commented that I was lucky be allowed an ultrasound at 5 weeks because they had to wait, but I hardly felt lucky.

The doctor did an ultrasound, looked at me and said, “There’s nothing in your uterus.” I immediately panicked. She tried to reassure me and said not to worry because it might be too soon, and they decided to keep watching me. Just a few days later, I started bleeding. I rushed to the ER, afraid I was having another ectopic. They performed another ultrasound in the ER and said my tubes were clear and to go home and rest. I was soooo relieved, and I started to let myself get excited and plan for my baby. Then, exactly one week later, the bleeding started again and I collapsed in my kitchen due to pain. My husband found me and rushed me to the ER. They performed an ultrasound and said they couldn’t see anything in my tubes, but due to my history they wanted to do exploratory surgery to see where the baby was because, again, my uterus appeared empty.

When I woke up from surgery, I was told that I had lost my baby. It was indeed ectopic and was in the same tube as the first time. They said that this time it had ruptured, and I was bleeding internally. They couldn’t save my tube this time. I lost that angel baby on January 29, 2014.

I was absolutely devastated. It took me a couple of months to start to feel like myself again. I even went on birth control because I was so afraid of becoming pregnant and dealing with another loss.

Recently, I started to feel better again, and my husband and I started talking about trying to conceive again. I went to my doctor for an annual exam a couple of weeks ago and mentioned to her that we were thinking about trying again and asked if  she had any advice, given my history. It was a pleasant visit. We chatted, and she performed my pap and told me I should be okay to try to conceive whenever I am ready and was excited to see me bouncing back from my losses.

A few days after my pap, my doctor called me and said I needed to get in there ASAP. I knew this couldn’t be good news as good news is always given over the phone. My sister came with me to the visit, which was only a few days ago, July 22nd. My doctor sat me down and said that I have cervical adenocarcinoma. She said that it just isn’t fair because I have been through so much. She said she would typically treat with a hysterectomy, but as I have never been able to carry a child to term, she would like to send me to a specialist to preserve my fertility.

At this point, I feel like I should just give up on my dream of being a mother, but I am determined. I am going to fight the cancer. I am going to preserve my fertility, and I will become a mother. I am a fighter, and if I could make it through so much loss in the last year, I can handle a cancer battle. So bring it on, cancer. You picked the wrong girl to mess with!