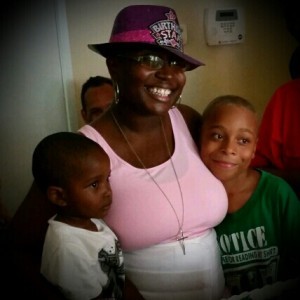 In January 2014, I found a lump in my right breast and it was kinda painful.  I went to the urgent care clinic where they did an ultrasound, gave me pain meds and told me a doctor would contact with the results.  A week later I was in the doctor’s office and he told me it was just a cyst.  He stated, “this is not cancer and could never be cancer, so don’t think that.”  I felt so relieved and went on with my life.  I was a 30-year-old mother of two sons, one of whom had just started baseball season. I was also a full-time student; so I was very busy. Three months went by and I noticed the lump felt like it had gotten bigger so I made an appointment with my primary care physician.  She was immediately alarmed.  She ordered an ultrasound that same day, then two days later I had a mammogram done.  Two days after that I had a biopsy, waited four days for the results and was told I was positive for cancer. My whole world changed after that. The next few weeks were full of tests to figure out what stage I was in. I found out that the back pain I was having was from a compound fracture of my vertebrae that was caused by the cancer and that not only was it in my back but also on my hips and pelvis. Not only was it stage 4 but it was metastatic. When I met with the oncologist, she gave me all the information I needed about the treatment plan and how long I would be on the meds. The only thing I didn’t want to know was how long I would or could live because I am a fighter and God willing I’m going to be here for as long as God would allow. I believe and I am claiming that I will be here for the next 20 or 30 years. Thank you JESUS!!! I am currently doing my chemo treatments and am responding well. With the strength and support of my family and friends and all the prayers of everyone, I am going to win this battle!!