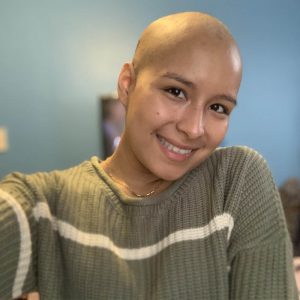 Hello! My name is Elizabeth, not Liz not Beth, just plain old Elizabeth. This has been a very interesting year for me. This year, like any other year, working with my toddlers who I love dearly.

At the end of January, I started getting sick and went to the doctor. Since I had flu-like symptoms (runny nose, a bit of fever and scratchy throat) the doctor said I had the beginning of the flu and gave me some antibiotics. As months went by, I started to feel worse, being tired all the time and I lost about 15 lbs. I also lost my appetite and started getting night sweats (it means you wake up all wet, and trust me it is not something fun). I thought nothing of it nor did the doctor.

In April, I started to get chills but my temperature was always 100.7. I remember going outside with my students when it was 72 degrees and having to put on a sweater. Additionally, I was experiencing lower back pain. I knew there was something wrong with my body and every day I prayed to God to help me figure it out even though it would be terrifying to find out.

In the last week of April, I went back to the doctor, but this time I would see someone different since I thought I didn’t have insurance anymore. I paid $80 just for him to see me. He did a urine test and pressed on my kidneys; that’s where the pain was coming from. The doctor said that I had a slight kidney infection, but not that bad and with some antibiotics, I would be as good as new.

On May 20th (which was two weeks later) the pain got even worse, and my fever went up to 102. I went to the doctor AGAIN and paid $80 AGAIN. He did a urine test again and pressed on my kidneys. This time when he pressed on my kidneys I cried out in pain. The urine test came back even worse than before. It was as if I took none of my antibiotics. He suggested going to the hospital because something was going on inside my body that required more tests. I called my mom, drove back home, and we rode to the hospital together. I registered and followed all the procedures they do in the ER.

That same day I got admitted into the hospital, which was something I never wanted to do. The nurses and doctors knew what was going on, but they didn’t tell me. I thought they admitted me for a simple kidney infection but no; it was something bigger. The next day (May 21st) doctors came into my room asking me all these questions and then an oncologist came in. Of course, I didn’t think anything of it (Who would?). He described what he found and said to me, “It might be cancer.” I was okay. They told me that I would have a biopsy the next day to see what it was.

Just when the oncologist was about to leave the surgeon came in. He felt under my left armpit and I felt something big move. I also felt a pain; a pain that I felt before but thought nothing of it. He said the words, “This one is big, this is where I want to take it from.” They both looked at each other. My oncologist’s face changed dramatically, looked at me and said, “It’s more likely cancer.” That’s when my mom and I lost it. I cried, she cried, and I then asked the next step. The next step was a biopsy to see how far along I was and go from there. From that May 21st my life was NEVER the same, and it isn’t the same now.

I’ve seen God’s blessings and love–something I’ve never seen before. I was officially diagnosed with Hodgkin’s Lymphoma stage 3B on May 31st. I turned 26 on May 27th and that birthday was unique. I started chemo on July 2nd after fighting with the insurance company. They made me switch to a different oncologist (Which is something I NEVER wanted to do because I really liked my doctor).

My life and my family’s life have changed for the better. Even though I went through a breakup while having chemo, I knew it was for the best. I’ve learned to love myself and right now I need to be selfish and put my health first. I see life differently, and I am thankful to God for giving me a second chance in life and I appreciate the little things.

I can’t wait for December 4th to come and be done with chemo. To ring that bell and say, “Yes! I’ve made it!” and of course, cry like a baby.