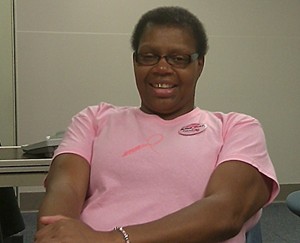 “GIVE GOD THE GLORY”

The month of October 2009 was a change for my family and me. A routine examination by my Doctor changed my life (somebody say – God is good. Psalm 34:8 KJV). She ordered a baseline mammogram for me to have, no particular reason, she just decided that it was time for me to have one. My dear friend played a part in this change of my life. I wanted to cancel and stay home because it was raining and she told me
that I better get up and go have it done since I was already working to get my health in order from other chronic conditions that I already had. So I went.

Particularly, the last week of October was when I found out that I had Stage III infiltrating ductal carcinoma in my right breast. Many thoughts ran across my mind. Being a stage III, I wanted to give up, I wanted to die, and then I remembered how my mom was so strong when any obstacle came her way. I remembered seeing her pray, listening to gospel music and crying but she kept going, praying, believing and having faith in God. She also continued to raise my girls until she was called home. I thought if I didn’t try to survive then my kids will be losing a mom all over again. I knew that would not be fair to them.

I also had my sister who had to take my mother’s role and I could not put all of that on her. I had a few co-workers that also talked, encouraged, and told about God’s word. After thinking of how strong my mother was and how she made it through her obstacles and the conversations from my family members, my friends and co-workers, I decided to renew my mind (Romans 12:2) and prepare myself in the steps that were needed to fight this dreadful disease. In the beginning, with all the tests that were ordered for me to have done before treatment could start, going back and forth to appointments for me and my children, and of course I still had to work, and with the anxiety that I experienced while waiting on the results from numerous tests, I wanted to give up because it seemed like too much to bare then I saw how God had blessed me. All of my results came back negative. The cancer was just in one localized spot and did not spread. I had a change of heart, got a little stronger, and decided to keep on going.

By the second treatment of the Chemotherapy, my hair fell out. I felt mortified and wanted to distance myself. When I saw my oldest daughter break down, I had to make the decision then to stay strong. It was after this second treatment that I experienced side effects from chemotherapy. It was three days before Christmas and I was missing my mother. On Christmas, my kids had to clean up after me and try to make me eat. I was deeply depressed I just wanted it to end. A soft voice whispered to me “Keep going. I got you.”

I kept going, getting a little stronger. Then I started having excruciating leg pain. When I had to walk, I couldn’t walk normal because I could not bend my legs nor stretch them out to normal length. Almost every day I went to the doctor and they insisted that the pain was from the chemotherapy. Finally, one of the doctors decided to run some tests on me and a blood clot was discovered. While I was in the hospital thinking about missing work, wondering how I will pay the bills, making sure my girls get to school and that they will be ok mentally while in school, I prayed and told God about it. I then made up my mind to just keep going, keep praying, keep believing and keep the faith. I was in low spirits because I was having side effects from the chemo. I was barely working and now this was happening to me. I started finding out that God outweighs any situation.

I had two co-workers come by who told me about God’s word, encouraged me, and prayed with me which helped me along the way. I did well after that besides the sickness from the side effects of the chemo. March came and my pain in my legs started again. I went
to the ER because the pain was so unbearable. I was admitted for very low blood pressure and the pain in my leg. After a few tests, I was diagnosed with muscular infraction (my leg had an attack) and dehydration which could have been caused from my diabetes or chemo. They told me that it would be six months to a year before I would be able to walk normal again and that I would need to be on crutches for that period of time. But I kept going (while hopping), I kept praying, I kept believing, and I kept the faith. Within a month I was walking at 85% normalcy.

Prior to my last two treatments of chemo, my heart function had decreased. I was taken off one of the chemos. I was about to let that get me down, but then I was told in the same session that the lump couldn’t be founded. The lump had shrunk. After my last chemo treatment, I went back for a visit and still a lump could not be located.

I started preparing for my surgery. My first surgery was the removal of six lymph nodes. They were sent off to pathology and the results came back negative. There was no cancer in them. God is able! I then prepared for my next surgery, the lumpectomy.
They removed the area where the lump was and sent it to pathology. It was NEGATIVE. God is awesome! This is why I kept going, praying, believing and keeping the faith. Even though I came out of one obstacle and faced another, He still brought me out. I AM
CANCER FREE!

After all that, I was hoping I was finished with my body going through something. Then I was told that I had to have 6 1/2 weeks of radiation – every day except for the weekend. I broke down, but I remembered where I came from. I know with God I will
be still going, praying, believing, and keeping the faith and I was surely going to make it through this.

Before all this I was working three jobs. While fighting cancer, I was down to one job and was barely working that, but guess what? I survived, the bills got paid, kids did not go hungry. I was not running from one job to another which gave me more time for God, and I got to know Him and the wonderful things He has done and can do. God is great and greatly to be praised. I did not think that I could stop all those jobs and still make it. I kept saying I was but never did, God did.

God wants us to know Him. He will have it so that the only thing you can do is get to have that personal relationship with Him so do it while you can and won’t have to face a dreadful situation. It took cancer for me to slow down. Also it took being in that bed after day after day, night after night, looking at my young daughters taking care of me. I decided to call on Him first instead of calling on people. People will leave you, won’t be anymore invites to the club or parties, no more going out to eat, because when you can’t keep up with the world they let you go. With God, He forgives and still blesses you. It took cancer for me to tell the world that He lives and all He wants is for us to live for Him and to serve Him and to be a servant for him.

The AMA recommends breast screening begin at age 40 (I was 38).  My doctor thought it would be a good idea to do a baseline mammogram a little early. God knows all things. I encourage you to do self breast exams, stay current with your doctor, eat
right, live right and try to stay stress free. If you feel something abnormal in your breast, please get it checked. Accept the Lord Jesus as your personal savior, have that close relationship with Him, because if you keep going, praying, believing, and keeping the faith, you will make it. Nobody can love or do for you like Jesus. Look to Jesus and not man. Study his word and you will become stronger each day. When the enemy tries to attack you, pray, read the word and speak the word over your life and situation. Friends, family members will leave you, it may be because they don’t know how to handle the situation or they just choose not to. Do not worry. You
continue going, praying, believing, and keeping the faith.

How great is our God! Sing along with me “How great is our God” and all will see how truly great our God is. His name is the name above all names. He is worthy of all praise. My heart will sing how great our God is. Surround yourself with positive people. Regardless of the obstacles that you keep running into, with Him, you can run through them and come out better than before.

“Don’t look at the messenger. Listen to the message.”

Revelation 12:11 says we overcome our enemy by the blood of the Lamb and by the word of our testimony.