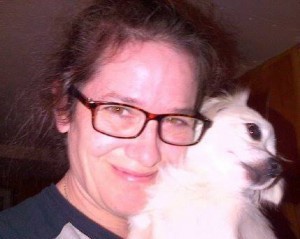 “Listen Carefully, It Whispers.” A few years ago I would have asked, “What in the world does that mean?” Today I understand completely.

I’m sure the start of my dance with ovarian cancer began close to five years ago when my period that started in November 2008 did not end until April 2009. Five long months of bleeding. In January 2009, I went to my OB/GYN (at that time) for an exam. She did a pap smear and an internal exam. She told me that I had no infection and my ovaries did not feel enlarged. She did agree it could be a symptom of menopause but said that it was abnormal for someone my age to be bleeding as much and for as long (two months at that point and I was 44 years old). No further exams were scheduled.

In June of 2012, I started experiencing pain and bloating on my right side. My stomach began to bloat too and I felt a numbness and tingly feeling. I went to the emergency room in Northampton. My best friend took me. It hurt so bad in my right side. I was having problems breathing, the bloating and numbness was horrible. I thought it might be a serious lung infection or worse, lung cancer. The ER doctor said my lungs were clear and was saying he didn’t think it was necessary for a chest x-ray to be done. He changed his mind when I asked if he was sure, but because my sister (that is what I call my best friend) and I had been there for close to 10 hours at that point, I declined to have the x-ray done. I wish I hadn’t.

On August 31, 2012, I tried to get up (I had been sitting on the floor at the bus terminal organizing my purchases) and fell back down. The pain was so horrible that I cried out. Someone came over and asked me if I was okay and helped me up. They even helped me take my bags outside (God bless this man, I wish I remembered his name but I’ll never forget him helping me). I called my daughter but she could not come to get me and I had to take the bus home. Every bump was agony, the walk from the bus stop to my room seemed to take forever. Every step I took hurt so bad. I had to stop every couple of minutes to catch my breath and hope the pain would subside long enough to take a couple more steps. Once I got home, I put my stuff down and called off of work. There was no way I was working that night.

I worked Saturday and Sunday. My daughter brought me to the ER in Holyoke on September 3, 2012. At this point, I could not take a step, sit down, lie down, nothing, without it causing me excruciating pain. They gave me morphine, and finally I could lie down without hurting. The ER doctor did an exam and ordered a CT scan. The person that did the exam looked at the images and asked me how long I had been feeling this pain. I said about six months and asked why. She didn’t say anything and said that the doctor would speak with me and I was sent back to my room.

The ER doctor told me that I had a cystic type mass that seem to originate from my right ovary. I asked her how large it was. She formed her hands in a round shape the size of a softball. She also said that it was leaking into my abdominal cavity and that was causing the pain. She gave me a weeks worth of pain killers and asked that I make an appointment with their gynecologist for Monday because this was beyond her.

The first available appointment was on December 24th. I went to see the GYN in Holyoke. The appointment lasted all of 20 minutes. He said that this was beyond his scope. He said that the mass was larger than anything he had ever dealt with. I asked him how large it was and his hands were shaping something the size of two newborn babies, it was that large. He also said that I might have cancer as it has the appearance of a cancerous mass. He said I needed to get a referral from my PCP to the D’amour Cancer Center. I told him that I had no PCP currently so they set up an appointment for me. But it wasn’t until January 2, 2013.

Can you imagine going through the holidays with this cloud hanging over your head? The dread that you may die. I was so scared. Can you imagine your children knowing this? Their fears? It was not easy for us.

On January 2nd, I saw Dr. Dillon. He too believed it was cancer and wanted me to go in that night to have surgery. I asked him if I could please wait until Monday. I had to give my employer some time to find someone to cover my shift while I was out.

On January 7, 2013, they performed a full hysterectomy, removed my appendix, and the fatty portion of my colon (my appendix and that part of my colon had been attached to this tumor). I was told afterwards, first by my children (later confirmed by Dr. Dillon) that the tumor weighed 20 lbs, there was so much fluid that my intestines were swimming in it, although the tumor had started as a cyst on my right ovary, there were cysts all over my reproductive organs, and yes, it was cancer and it was exclusively ovarian (Stage 1B).

I got very lucky, the surgery removed it all, I did not need to have any chemo. I am so grateful!! 🙂 Thank you Dr. Dillon again for saving my life!! To my family and friends who saw me through this I cannot tell you enough that I love you!!

Hello, my name is Kim. I am a wife, mom, granny, daughter, sister, auntie, and …