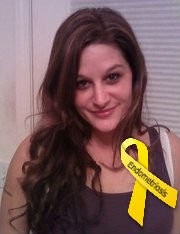 Hello ladies, I am new to the group and thought I would share my story. Mine is a bit different than a lot of the other stories. Growing up I had no problems with my periods, they weren’t that heavy and tylenol would take care of the cramping. In 2005, I had to have an emergency c-section with my first daugther. Everything went fine and I had no problems. In 11/2008 I had my second c-section (by a different doctor) and also had my tubes tied and this is where my hell on earth started from. I had severe back and abdominal pain, I was in pain 24/7. I did some research and everything kept coming up as Endometriosis, so I went back to my doc and he said “no, it’s just GI issues” – I never went back because I knew he was wrong. It took me until 7/2009 to find a doctor that believed me. He found that I had 4th stage endo and almost all of my organs were glued together. After many surgeries I finally had to have a full hysterectomy and the pain has NEVER gone away. Well I got to talking with one of my friends and we discovered that she went to the same doc that I did for my 2nd c-section and to get my tubes tied. Sadly she is now begining to have the same symptoms as I did and we both fear that she may now have endo. She is going to meet my new doc and have him diagnose her. However, this sparked an idea for me, that doctors that are doing c-sections may accidently be ‘giving’ us endo by allowing the endrium (sp) that should be inside of our uterus get outside of the uterus or even in the open insicion site. So I was wondering if anyone could help me, I would like to know if any other women on this site have had the same experience. Both my friend and I have no family history of endo or any autoimmune diseases. Thank you for taking the time to read my story and please let me know if anyone has had the same experience.