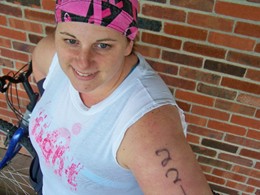 My First Triathlon…. an emotional, exhilarating and downright terrifying experience!

32 years old…3 knee surgeries…1 collarbone surgery….1 broken jaw…1 horrible forearm  reconstruction due to dog bite… 1 bum shoulder…plantar fascitis…and a foot injury. Oh yeah, and a very recent Breast Cancer survivor. These were most of the ’cards’ stacked against me when my Physical Therapist /Personal Trainer /Coach put the idea of doing a Triathlon in my mind about 10 months ago. At the time, undergoing Chemotherapy and Radiation, I immediately dismissed the thought entirely! I have worked out my entire life, played plenty of sports and stayed pretty active yet I knew that the level of working out I had done was nothing
compared to what I would need to complete a Triathlon…and the added physical exhaustion from Chemo & Radiation weren’t going to help! And there were two little problems….I HATE biking!! I had a bad biking accident when I was a very young girl, and in the last 22 years I have never gotten back on another bike, and after my 3rd knee surgery the Dr told me if I started running again I would be looking at a complete knee replacement in the next couple of years. I laughed in PT mans face and for a few weeks didn’t give it much thought.

’PT man’ as I call him, forced me to start indoor biking as part of my ’get through chemo’ rehab. After a few weeks, I found I didn’t
mind the indoor bike as much as I had originally. It was getting easier and easier, and I was pushing myself to go harder and faster. One day I was whining to him about how I needed a goal…something to look forward to that would keep me working out and physically getting stronger and something that would also make going through chemo & radiation a bit more bearable. Again he brought up the Triathlon. He said ”look, you swim, you run and now you’re biking….what a perfect goal to end your crazy year of cancer and put it behind you.” I still wasn’t sure how I would ever have the energy or stamina to finish it but I started thinking, ’how cool would that be to say that less than 1 year from being diagnosed with cancer….and after all the injuries I’ve sustained, that I did
that! I did a Triathlon!”

So thus began my journey. It has been a very difficult one, and a very emotional one!

Over the winter months I continued to progress physically, and was getting stronger and stronger as the months went by. About 2 weeks ago I was finally running all 3 miles, (very slowly, but still running!) and I was swimming a decent under 9 minute swim. But there was still the bike. On the indoor bike I could crank out 15-20 miles in an hour, on a pretty decent level, but until a week ago I had never been on a bike with gears! With all the crazy winter weather and rain we’ve had lately, it just never worked out to ride the bike outside until last Saturday, ONE week before the Triathlon!!

PT man & I went to ride the Tri-course, he on his fancy-shmancy bike, and me on my el-cheapo. The whole time I had all these crazy thoughts & fears running through my head….like’ I’m going to fall off my bike! Or I’m going to veer off and fly down that huge hill over there and crash! Or a car is going to hit me because I can’t keep the handlebars straight at all times!!’

We came to the first big hurdle, the giant hill. I was thoroughly disgusted with myself for having to stop on the hill and rest my legs. But I limited the stop to a few seconds (maybe a minute!) and I kept going….until the other GIANT hill on the other end of the course! I had to stop half way up this one too. But after a brief pause I kept going and finished one lap of the course. I knew that doing a
Triathlon would be difficult, and I knew all along that the bike would be my hardest part….but I had really thought that I could gut it out and just do it. Sure, I would be really slow, but I would finish. I was so incredibly discouraged by that first ride and started rethinking doing the Tri at all!

PT man just said, ”Well, maybe you should just do the Duathlon instead…I’d be just as happy if you did that.” (Looking back now,
I’m thinking this was probably part of his strategy all along…seeing as he knows how I hate to fail!) Still, there was a huge part of me that thought he was right, I should just do a Duathlon. A Duathlon is only a 1 mile run+ 7.5 mile bike ride + 1 mile run, instead of the Triathlon, which is 440 yard swim + 15 mile bike ride + 3 mile run. While trying to blink back tears of disappointment I just nodded.

But I REALLY wanted to be able to do the Triathlon. I wanted to prove to myself that I could do something this big, something this physically demanding, and really, I wanted to celebrate that this marks the end of a really crummy year! I went home, cried a little more, wallowed in self pity a while longer, then said screw it! I’m going to do this…so the very next day I grabbed a different bike, dusted off the cobwebs and went back out to the dreaded hills. I still didn’t make it up the first hill, and this bike was having gear problems….not just the ”I’ve never used a gear bike before in my life” problems, but real problems! About half way in the first lap my chain came off, my foot got caught and I went flying, hard! (I still have bruises that are painful!) I figured that was a sign, and I just gave up, sat down and cried again! I was SO mad at myself for not getting on a real bike earlier, and for not training on more inclines…and I was SO mad at PT man for not preparing me for those hills!

That night I sent an email to PT man and said I’m not doing it. I’m not doing this Triathlon, I’m not ready, I don’t want to have to walk my bike up the hills, I want to train more and do another Tri at a later date when I feel better about it. He just said, ”Okay, I will support whatever decision you make.” (Again, I’m pretty sure this was part of his plan psychologically!) The next few days I was a complete emotional wreck! This Tri meant so much to me! It was the biggest physical accomplishment I have undertaken since at least college, but it was also a mental and emotional battle for me..and something I really wanted to conquer. I always underestimate myself, or sell myself short. I also don’t like to do new things, particularly things that are in big crowds of people!! I have major anxiety and panic attacks about almost any ’unknown’. And as an avid sports person, I don’t like to lose, (trust me, winning wasn’t something I thought would happen) but I felt like having to walk a hill was losing, and I just didn’t want to do it!

All week long I kept going back and forth about whether or not to do the Tri. PT man had a couple friends who have completed this Tri talk to me, to try to assuage my fears, or more likely just give his ears a break from my crazy panicked ramblings! One girl in particular was very matter of fact and finally said, ”so what if you have to walk a hill!? So what if you have to walk a little on the run part?” Finally her words sunk in. I eventually calmed down enough to look at things logically…Yes, I will almost certainly have to walk most if not all of the hills, and yes, I might have to walk part of the run, but so what!? I CAN finish, and that is my ultimate goal! I was going to do this!

I was still anxious and panicky until the morning of, then I was strangely calm…still nervous, but emotionally calm. I met PT man to get all my injuries taped, and almost panicked when I heard that the T1 was closing in 7 minutes! But while I went to get my timing chip, PT man went to do a couple last minute things to the bike for me. (you know, like airing up the back tire! Haha) A few minutes later everything was set & I was headed to the pool to watch the elites take off.

I waited…and waited…and waited in the pool. There were over 850 people doing the Triathlon! I overestimated my swim time at 10 minutes. I passed several people along the way, was only passed by one, who then proceeded to give me a bloody nose (that I didn’t realize until everyone at the end line was asking how I was because of the blood!).  PT man was waiting for me at the bike to encourage me through the transition area. Now for the dreaded bike ride! The ride went about as I expected it would. It was tough, but I stuck with it. I rode as far as I possibly could up every hill, having to walk up only the last half of the hills . Each time I had to get off the bike it was humbling, but every time I hopped back on I felt a new little burst of energy. I eventually finished the course all in one piece! I
felt like the last person out there on the last lap of the bike. I know I wasn’t, but if sure felt like it. I just kept moving though.

The run seemed faster than 3 miles usually does for me (it really wasn’t, but it seemed so) I had to walk the first 1/2 to 3/4 of a mile just to get my legs back from the bike ride, but then I started running. I ran pretty much the rest of the way, only having to stop momentarily one other time. I was so focused on that end line that I didn’t see my kids, mother-in-law or my best friend who had come to cheer me on!

Today I can say that with the grace of God and LOTS and LOTS of help and training from PT man, I did it! I completed a Triathlon! I accomplished a huge physical challenge for me only 6 months after finishing chemo & radiation. This was perhaps one of the hardest things in my life I’ve ever done. It required lots of discipline & structure in my workout schedule, and though I had already drastically altered my diet due to cancer, I still had to adjust my diet to accommodate working out more. But at the end of the day I gave it my all…and when jumping off ship would have been so much easier, I stuck it out, and I am SO glad I did!