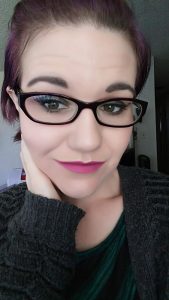 At the age of 23, my life changed. I went into my OB-GYN for a normal yearly Pap smear. Two weeks later they called me to tell me I had abnormal cells. At that time, it was just abnormal; the doctor told me he wanted to re-test in three months.

So, I waited, and when the time came, I was nervous, but another Pap smear was done, and the doctor reassured me that my body would fight it off and I was fine.

Then two weeks later the call came, I needed to come back in again, this time for a biopsy. After the biopsy, I found out I was at CIN 1. [Cervical Intraepithelial Neoplasia (CIN) is a precancerous condition in which abnormal cells grow on the surface of the cervix.]

The doctor again reassured me that I would be able to fight it off. At this time, I found out I had HPV 18 (human papillomavirus).

Three months later I had to go back in again for another Pap test. Within a week I got the results. It had now grown to CIN 3 and I needed to have part of my cervix removed. I’ve never been so scared. After the surgery to remove part of my cervix, my doctor told me he had to remove a lot more than he was expecting. He took over half my cervix and found cancerous cells.