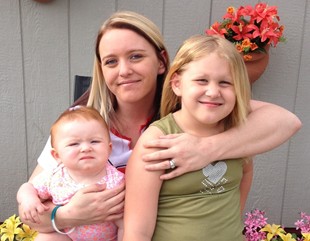 I started receiving pap smears in 1997 at the age of 14 due to a diagnosis of endometriosis and recurring ovarian cysts.

I never had any issues with them up until 2008, however, two years after the birth of my oldest daughter (by the way I was told due to my issues that I’d probably never be able to have children), my yearly pap came back abnormal. I went in to have a colposcopy and biopsy done. There were eight spots total that the doctor biopsied, and the results came back as mild to moderate dysplasia. The doctor assured me that it was OK and that I just needed to be monitored.

Four years later, I was still going every six months for paps and biopsies. It wasn’t healing like was originally thought. I kept asking for further testing, but the doctors would not because of my age and only having one child. They didn’t want to hinder my ability to have any more children (even though I was set as I did not want anymore). To my surprise, in October 2011 I was pregnant. After almost six years of just one child, we were sure we weren’t meant to have anymore, so this news was more than a shock. On June 4, 2012 at 3:30 am my water broke, and three hours later after an emergency c-section, I was blessed with another beautiful little girl.

Since I had a c-section, I did not see my normal doctor. The next day the doctor who delivered me was looking over my records and noticed the issues I had been having. She said that at my postpartum appointment, if it came back abnormal, she wanted to do a leep procedure, since now I had two children, was almost 30, and it had gone on long enough.

Six weeks after I had my baby I went for the pap and, as always, it came back abnormal. September 18, 2012 I had the leep procedure done. About six weeks later, I went back for the follow up from the procedure and got the news I had cervical cancer. She was pretty sure it was contained but didn’t want to wait any longer because there was no telling how long this had been full blown cancer.

December 3, 2012, six months after having my little girl, I was back at the same hospital having a hysterectomy at the age of 29. The cancer was in my cervix, uterus, and one ovary. They also took my lymph nodes to be sure and left one ovary that was barely functioning due to my other problems, but they didn’t want me to go through menopause if it wasn’t necessary.

I’m now six months post-op and still clear, so far! I owe my life to my daughter and that doctor. Without them this still would not have been found and wouldn’t have been as easy to take care of as it was. There was a reason I had my second baby and that was to make sure I was still around for my family. Always listen to your instincts. I knew something more was wrong but trusted my doctors that it was nothing to be concerned over. I now know better! Thank you for reading!