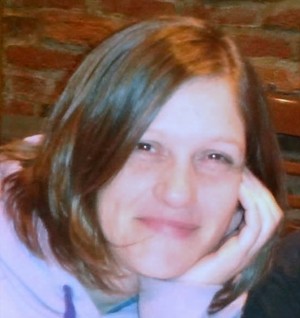 My name is Erika and I just turned 40! I am so lucky to be alive. I am also lucky to be able to be a wife and a mother to two amazing children! Thankfully I had wonderful help from my in-laws during my difficult time.

In 2009 I had to have a hysterectomy. I had everything removed except for my left ovary. The reason for the hysterectomy was because after I had my daughter in 2005 I was having horrible menstrual cycles. I kept getting cysts on my ovaries and they would burst. The pain was unbelievable! Eventually, my right ovary collapsed and filled with blood. My gynecologist also found that I had endometriosis and that was causing me to have a lot of pain. After my hysterectomy I spent a week on the couch, I was barely able to get up. By that Friday I had a high fever and pain. I told my husband I thought something was wrong. I didn’t want to complain because I felt like I had just spent the last couple of years in constant pain, while complaining! I called the doctors office and they told me to just relax and take some Motrin and see how I felt by Monday. I actually started feeling a little better. My in-laws left on Monday and I decided that I was just going to deal with the pain. By Tuesday morning I was in so much pain that I couldn’t stand up. I had a fever and was just feeling horrible. I called my friend Tracy and she came to pick me up and take me to the hospital. It turns out that I had a hematoma that was quite large! I was admitted right away. I ended up having to have blood transfusions. An hour into the second bag of blood I had a horrible reaction and began shaking uncontrollably, my nurse paged my doctor who was on call that evening because she said she had to have permission to stop the transfusions. She called him 10 times and he never answered, I told her if she didn’t take it out I would, it was a horrible night. I was in the hospital for three days. I didn’t see my doctor until the day I was discharged and even then he only came in to tell me I was fine and could go home.

Over the weekend I still wasn’t feeling to great so my husband took me back to the hospital and they did another CT scan and found out that my hematoma had actually gotten bigger and that they were sure that my doctor would probably admit me. They called him and he told me to go home I was fine.

On Wednesday morning I woke up with this stabbing pain in my ribs! I couldn’t breathe the pain was so bad. I called my doctor and he told me that it was probably just gas. Again when I woke up on Tuesday the pain was getting worse. I called my doctor again and asked him if maybe I had a blood clot. He said, “No way, you are too young and  it is just gas from the surgery.” I woke up on Friday morning and still had pain. I decided to go to the doctor office and show him where the pain was and explain to him how I was feeling. He told me there was nothing wrong with me and gave me a prescription and told me he would see me in a week. I went the entire weekend taking those pills because if I didn’t take them then I couldn’t breathe let alone function. I was so upset and kept thinking I was crazy and that this was all in my head. By this time my hubby and kids were going crazy with all the trips to the hospital, after all this surgery was supposed to fix me not ruin me!

On Monday morning when I woke up the pain was so bad I almost passed out. My husband took me to the ER. They started an IV and gave me real pain medication. They sent me for a CT scan and took me back to my room to wait for the results. Soon after three doctors came into my room, they said that I had two blood clots, one in each lung. They said they couldn’t believe I was still alive that no one survives this. They started a Heparin drip and admitted me to the hospital. My husband and I were in shock! We didn’t have any family to help with our children so it was a difficult time. Our in-laws were in Erie and I did not have a relationship with my parents. It was a horrible time for all of us. I was in the hospital for four days and I cried every night! My children were so sad and upset that I was not home. I was very thankful that God was with me and that he let me live!

I told the hospital that I wanted a new doctor and that the old one was not allowed in my room. On Wednesday night one of my friend’s came to visit me while they were there the doctor actually came into my room and started yelling at me telling me there was nothing wrong with me that the other doctors had gotten it all wrong! I was scared to death and called security. He left the next morning I reported him to the head of the hospital. I was so scared to be in my room alone that I had my friend Tracy come spend the night in my room with me. That night the doctors overdosed me on pain medication and I woke up with a horrible headache and was throwing up… it was horrible! That day I spend trying to recover from the pain medication! Before going home they switched me from Heparin to Coumadin. I ended up being on Coumadin for nine months and had to have my blood drawn every week. I ended up being on 10 mg a day every day. My body was not doing well on it. I was tired all the time and was just worn down. I stopped taking the medication. I’m sure that wasn’t the best thing to do and I don’t recommend it, but for me, I had to. I ended up reporting the doctor to the board of physicians in Harrisburg. They contacted him and and did an investigation. Nothing happened to him.

I then started seeing a different gynecologist that had been recommended to me by a good friend. I started having horrible pain again on my left side. I ended up having to have surgery to remove it. Well, in January I started having horrible pain again and this time really thought I was going crazy since there wasn’t supposed to be anything there. This doctor said that it was just pain from the surgery. Again I found a new doctor and made an appointment. This doctor was amazing and he did an exam and an ultrasound.  Guess what he found… it turns out that the previous doctor missed part of my ovary and now there was a huge cyst on it! I made an appointment with him for surgery, while waiting for that surgery I started having pain on my right side I went to another doctor they did tests and found out my appendix was very bad and had to be removed! Both doctors performed the surgery at the same time. I had to be cut straight down starting at my belly button! It was a horrible thing to have to go through!!!

Finally I have no pain in my abdomen and am able to go on with my life. Because I have had a full hysterectomy I am now in menopause and having some symptoms from that. For years I was in constant pain and could never tell anyone what was going on because I just felt like people would be like or stop being a hypochondriac. So every day I smiled and fought through the pain. It wasn’t easy.

My advice to women is never listen solely to your doctor, listen to your body and make sure you get a second opinion.  I had to fight for years to get through my days pleasant and trying to be a great mom and wife.

I thank God he got me through it and am able to tell my story!