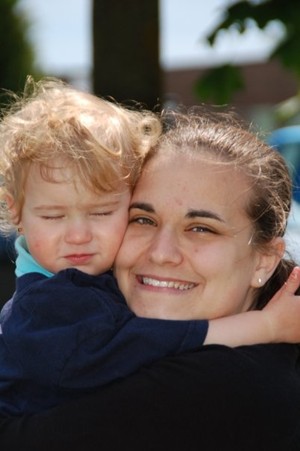 Okay, so here it goes.. This will be a long one so get comfy!

Here is a bit of background on my family medical history- My mom was diagnosed with precancerous cervical cells at about the age of 30. Previous to that, her periods were bad and painful and showed many of the same symptoms as mine do. This was the mid to late 80’s when knowledge of Endo just wasn’t clearly known or even frequently diagnosed. When she was diagnosed with the precancerous cells, they told her that she had one year to get pregnant if she wanted another baby or get a full hysterectomy. Well, let’s just say that I am an only child. At the age of about 35, she was diagnosed with breast cancer and had a right mastectomy done with six months of intense chemo. All this to say that at the age of 55, she suffers from EXTREME osteoporosis which is debilitating.

On to my story: I have known I wanted a baby since the age of 12. I started my period at the age of 12 as well. The bleeding was heavy, cramps were so intense they would make me vomit, and I would be weak for days.

At the age of 17, I met my now ex-husband and a few years later we decided to get pregnant. I got pregnant for the first pregnancy three months after going off the birth control I was on.  Which, by the way made me as sick and as hormonal as my periods did, all the time.  But I miscarried at about 7-8 weeks and experienced a month of heavy bleeding and huge clots.

About three months after that, I found out I was pregnant with my oldest daughter and gave birth to her with few complications other then a hemorrhage due to my uterus not contracting down. I was lucky to breast feed her for 18 months and I was on a low progesterone birth control until she weaned. I got pregnant again three months after that and had my youngest daughter with no complications at all. I breast fed her for 18 months as well but started noticing changes in my body that were not pleasant.

This started in 2008 when I felt like I was sitting on a balloon with knives stabbing me.  If I stood up too quickly, I would feel a searing pain like someone took an elastic belt to my belly. I brought this up to my family doctor and he figured it was my cycles trying to come back after being dormant for so long. I let it go because sure enough, shortly after that appointment, I got my period back. And it was HELL.

So began the hormonal roller coaster. I left my husband in 2010 and that same year, noticed excruciating pain on my right side. When I went to the doctor, he sent me for an ultrasound and lo and behold, I had a cyst. While dealing with all this pain, I looked up what it could be and of course, Endo was in the list of things I could be suffering from.

August of 2010 I met my soul mate. He waited a few months for me while I got my act together, and I decided that I wanted to see where things would go with him. He accepted me with two kids and we were in love in no time. In September of 2011, we decided we wanted to add to our little family. Gut instinct told me this wouldn’t be easy so I braced myself. After a couple of months, I knew we needed help in figuring out if there was something wrong with me or if there was something wrong with my husband. Once we figured out that he was fine, I knew in that instant it was me.

I was referred to a gyno who ran the usual tests- checked to see if I was ovulating, if my hormones were okay, as well as thyroid and such.  All came back fine.  I was researching what it could possibly be when the ”E” word popped up again. After reading the symptoms, I was pretty certain that was what was wrong.

That day changed my life.  I woke up from surgery and was in the recovery room when the nurse came to check on me. I asked if anything was left for me and she handed me a note left by the resident who assisted in my surgery. I read the note and broke down crying. I was finally diagnosed.

As I healed from surgery, I realized I needed support. I joined a couple of Facebook groups and reached out to those I knew who had the disease. I was also placed on Visanne for four months, then was off it for a month before being told I had to go back on because I had stage three precancerous cells that needed immediate treatment. Some days are hard, pain wise, emotionally, and I am tired all the time. I wonder if I don’t have some form of IBS or Chronic Fatigue Syndrome, but I refuse to give up the fight.

My girls will know what Endo is and what to look for. If I suspect they have symptoms, they will get checked out and treated.

My diet consists of gluten free foods, minimal dairy, and I am focused on this and I will stand to fight it. We are back on our trying to conceive journey and all I can do is hope we are blessed one more time. That is all I am asking for.

To all the women who read this and the other stories, we are our own voice and we are the ONLY ones who will fight for us and our lives. We all need to stand up and let people know what this ”invisible disease” really does.

Thanks for listening. As some of the girls in the Facebook groups say: ”*Yellow Hugs*”