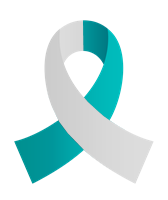 In March 2015, I went to the local ER for what I thought was a really bad cold. I had been very short of breath for weeks, so I figured an antibiotic would fix it all. After having some blood work done, I was found to be in acute kidney failure. The shortness of breath was from congestive heart failure caused by the kidney failure. I was sent to a hospital an hour away for dialysis. They decided not to do dialysis, but to try kidney stents, which worked. But while they were placing the stents, something was seen protruding into my bladder. I was then sent to a women’s hospital in Pittsburgh. I was then diagnosed with stage IVA cervical cancer.

I traveled to Pittsburgh, which is three hours from home, every Monday and stayed there until Friday for seven weeks. I received seven rounds of chemo, 28 rounds of radiation, and five brachytherapy treatments. During this time, the radiation of the tumor caused a hole in my bladder. In April, nephrostomy tubes were placed, which I still have. In August, I went for a follow-up PET scan which only showed a small spot, which they feel is NOT cancer. I will go back for a biopsy to just make sure the spot is not cancer and then will be referred to a urologist for a urostomy.

This will soon be in my past, but I just wanted to let others know stage IVA cervical cancer can be beat. Losing this fight was NOT an option!