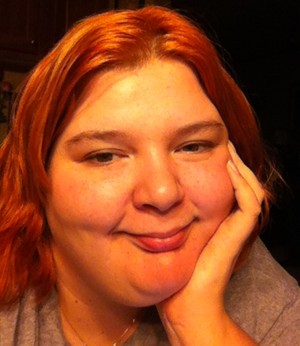 I guess you can say that I have always been a fighter. My periods started at 13 and were pretty normal up until I was about 15 years old.  At 15 I was raped by someone I thought I could trust, but I guess I was naive. Not long after that my periods started coming heavier and heavier, and I would skip months at a time. It would hurt so bad at times that I would be doubled over in pain. I can remember going to the gyno, he said he didn’t see anything wrong. Well the weekend came and I started hurting so bad that I fell to the floor. My mom took me to the ER, they tried to tell me that I had about six different types of STD’s. I knew I didn’t but that still bothered me. I kept telling my mom that we had to find a new doctor because something wasn’t right. The cramps were getting worse. I was bleeding so heavily that I would soak up a pad within 30 minutes.

I got married at 19. Within the next month he had beaten me, and ripped my private area, to the point I was bleeding. Then I got deathly sick, I went to my gyno and was told I had a bacterial infection, yeast infection, kidney infection, and an infection in my uterus. I was running a 101.6 temperature, couldn’t sleep, eat, or even move around. My husband at the time would cuss me out because I couldn’t take care of him.

After four different antibiotics and creams I was finally better. A month later I made up my mind to leave him, because he was abusive, both mentally and physically. At this time I was on my own. Then my mom got sick. She was rushed to the ER, and we found out she had blockage in her heart.  She was admitted, and had to stay over the weekend because all they had was a skeleton crew. She made it through the arteriogram, two of the veins in her heart were almost completely blocked.

That Tuesday I had to go to my dad’s work to get his paycheck. There was this man sitting there, I had seen him before but I didn’t know who he was. There was something about him. The reason I say that was because the first thing he said to me was,  “Where is your mom?” I knew then there was something there. Well about a week later we started talking just as friends (he knew that I was going through a divorce). After a month my divorce was final, and we started dating the next day. He understood I had a lot of problems but he loved me anyways. Well right after my 20th birthday I married Jeffrey.

Fast forward three years, (at the age of 23) I saw an ad on TV for a new gyno and I told my mom it was worth a shot. That next Monday we made an appointment, she did a pap smear, ultrasound, and blood work, that following week she called me back in. That is when I found out I had polycystic ovarian syndrome, with a touch of endometriosis. I started birth control and a low fat diet. I gained weight, had terrible mood swings, so she swapped the birth control. The next one made my cramps worse, then the next one made me bleed for five weeks straight, so I stopped them all.

This year, I went back in for my yearly exam, my ovaries look better, and I have lost a little weight. I still struggle through everyday. Pain medicine doesn’t help that much, but they make it subtle enough that I can get through the day, and I also take Metformin. I am happy though because I finally know what is wrong and I will continue to fight. My husband is my rock, no matter what he is there holding my hand, and cleaning up the mess my period makes. He wants me to focus on my health. Remember that no matter what always continue to fight!