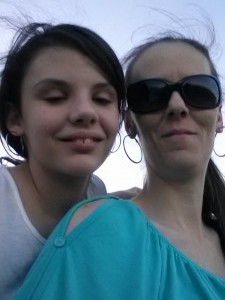 Here’s my story: It starts on my 12th birthday, when after spending entire day ill & “crampy” I  went to restroom to see that I was now a “woman,” as they say. I told my mom and spent next six days in hell. I thought, “wow this isn’t what I was told it would be like.” Each month was as miserable as the next, missing school and being called a hypochondriac. At 15, I knew something was wrong and I demanded answers. After 13 doctors, one said you have endometriosis! I have what? As I’m digesting this information he says that I also have stage three cervical cancer. At this time I was alone in the office and I fainted. After coming to my senses I listened to him and made all the necessary appointments to deal with all that was going on.

After laparoscopy, freezing of the cervix, then removing most of the endo, I was told I wouldn’t be able to have kids because the endo was pretty bad. At 18 I had another laparoscopy and the doctor decided I needed a hysterectomy and we set up an appointment. But at 19 I realized that I wasn’t okay with a hysterectomy and instead of going to the appointment I made huge life changes. Six months later I was feeling sick and all kinds of weird so I went in and found out I was pregnant. I was put on immediate high risk & it was a long hard pregnancy, but I had a healthy baby boy that I wasn’t suppose to.

They said that pregnancy made it better but a year later I was having serious stomach pain. After 13 ER visits between two states, I found that my gallbladder had been consumed by endo & it was removed. While I was in hospital for that my left lung collapsed. Two weeks later I was okay but needed to see my OB. Three months out of that surgery I found out I was pregnant again. I was in a different state than my home and four different doctors there wanted me to abort the baby and said it wouldn’t make it anyway. I came back to my home state to see my specialist whom couldn’t believe I was pregnant again. They put put my on high risk again and I was on bed rest at six months till my scheduled c-section. At which time he gave me a tubal cut, tied, and burned because he said that I could not get pregnant again. This pregnancy made the endo worse.

Hubby was a little disappointed. He wanted one more but understood because he’s really amazing! I was 20 with my first & 23 with the second. Since things have gotten way worse especially since I have had no insurance for last four years for right treatments! I’ve had two more laps as I call them, a colonoscopy, and then surgery to remove endo from my colon, I been diagnosed with AS-arthritis of the spine to sum it up, and I still have no insurance. I have done the Lupron treatment and it was horrible plus it rotted out my teeth (that is one of its side effects). Changing my food diet has helped the most but that can only do so much. As soon as I can get insurance they want to preform a full hysterectomy and that is scary. I hope that someday they will have more testing, knowledge, and that we get acknowledgement for what we really go through. My advise to anyone new to this disease is understand your body and above ALL listen to it! Know that it’s not you, you’re not crazy. Your human, it’s okay to feel the way you may, but know social media is the best thing that could be for people like us to know your not alone! Thanks for reading!