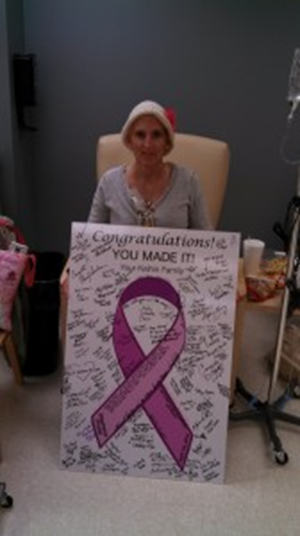 Two weeks before Thanksgiving I had an appointment with my family doctor to discuss the arthritis in my big toes, yes I said big toes. While I was in her office I informed her that I had found a lump in my left arm pit. When she felt it her eyes got big and she said that I needed to have it removed. But she also said that since it hurt and it moved that is should be okay. Her nurse made an appointment with a surgeon for the following week.,7

The following week I went into see the surgeon. He felt the lump and had the same conclusion as my family doctor. We set up the date for the surgery for after Thanksgiving on  December 03, 2013.

On December 03, 2013, I arrived at Hancock Memorial Hospital for a routine procedure to remove a swollen lymph node. This day would change my life forever.

When I woke up my loving husband, of 29 years, had to break the news to me. The doctor found four swollen lymph nodes with cancer in them. They weren’t sure what kind of cancer or where it came from. They would have to send them out for a biopsy and we would find out by next Tuesday December 10th what the results would be. I don’t remember crying. I think I was in shock. That was the longest week of mine and Jeff’s life.

On December 9th,  we went to the doctor’s office. The biopsy was in, it showed breast cancer. My next appointment was with the oncologist, on December 10th and this is when the tornado started. I can’t remember the whole conversation so it’s a good thing Jeff was there and  that they gave us a nurse navigator.

Next  I was to meet my breast specialist and I  had a PET scan. My mother-in-law went to that doctor appointment with me, where I had two needle biopsies. And excuse the language but holy shit did those hurt. He stuck a needle in the spot where the lumps were at and looked at them under a microscope and sure enough they were the cancer. He than ordered an MRI to look at the right breast. I was proud of my mother-in-law she did pretty well at the doctors office. She held my hand and covered my eyes so I couldn’t see the needle coming. Thanks Gail.

The PET scan showed that the cancer spread just below my collar bone but that was treatable too. The MRI showed no cancer in my right breast. So the strategy was chemo, mastectomy, and radiation.
It seems as though every time you enter the doctors office they come at you with a needle, and since they could only take blood from my right arm, my vein was getting very bruised. So on December 17th, I had a port put into my chest, which should have saved my veins and been less painful.

On December 18th,  my chemo began. It was four and a half hours of treatment. The nurses were/are awesome, but because sometimes I can be a handful and I knew these nurses would have to tolerate me for the next year I kissed up early and brought them my world famous Kolackys, which of course they were a hit. The chemo treatments were not that bad. Well until Saturday, I got a little sick in my belly but not as bad as I thought. My next treatment on  January 7th.

I received Chemo every three weeks. My last treatment was on April 1, 2014. I went to work all through my treatments and I also worked out at the gym. Yes I felt like crap but I felt if I didn’t keep going I would sit down, feel sorry for myself, and give up, And there was no way in hell was I going to do that. My co-workers were awesome. they were always encouraging and helped me when they saw that I was tired down.
I received my single mastectomy on  May 07, 2014, and just had my drains taken out yesterday. I start my 25 treatments of radiation on June 09, 2014, and then six months later I will have reconstruction surgery . I will have to receive a one hour treatment of Herceptin every three weeks for the next year.

People thought I was a bad ass before I got cancer, now they know I am. FIGHT LIKE A GIRL.