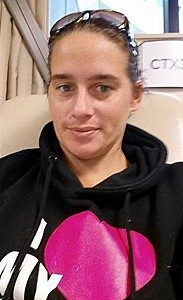 In 2014, I found out I was pregnant with my 4th child, and because I had complications with my 3rd child, I had to go see an OBGYN from the start of my pregnancy. I had a Pap test done and found out that it was an abnormal Pap test. My OBGYN then told me that they would have to keep a close eye on me to make sure that it was not cervical cancer and keep an eye out for signs of precancerous cells. Well, when I was 28 weeks pregnant, my doctor told me that there were signs of precancerous cells, so I would have to make sure I came in after the baby was born to get another Pap test and a biopsy. I had my son in December 2014.

On March 30th, 2015, I went in for a biopsy. A week later, I was told that I was diagnosed with cervical dysplasia. I then was given a date for June 12th, 2015 to have a LEEP procedure done. I went in and had the procedure done, but then I received a letter in the mail on June 22nd, 2015 that was dated June 18th, 2015 from my OBGYN office, stating that my doctor had been trying to get a hold of me. I went into the office the day I received the letter to see what she needed me for. That’s when my doctor had me go in back to a room and wait for her to come in and speak to me and my husband. We had our 2 youngest boys with us. When my doctor came in the room, she shut the door and sat next to me. Right then and there, I knew that there was something wrong. I told her to just give us the bad news. That is when she told us that I had cervical cancer. This was very heartbreaking, especially on that day, because me and my husband were discussing that in 5 years, we wanted to try for one more baby once our youngest was in school, to try for a girl. My doctor then told me she was going to set me up with the best oncologist that she knew and kept saying sorry to me and my husband.

On July 9th, 2015, I went in for a CT scan. On July 14th, 2015, I met with my new oncologist. At the appointment, we got some good news that the cancer had not spread and that we did catch it in time, and I was only stage 1 A1. My oncologist said that we had 3 different options. Option 1 was a regular hysterectomy, option 2 was a radical hysterectomy, and the 3rd option was a radical trachelectomy. Before our first visit with the oncologist, my husband and I had come to terms with the fact that we would no longer have any more children and that we just wanted me to be healthy so I could be here for the 4 kids that I already have. So when I was given my 3 options, I chose the radical hysterectomy so that I wouldn’t have to go through menopause at an early age. We knew the risks of the trachelectomy, that the chances of me carrying to term were very, very low and that I was at high risk of a miscarriage. I didn’t want to have that risk with a baby, so I thought the radical hysterectomy was the only choice that made sense. A month later, I was given a date for surgery, which was for October 7th, 2015 at 6 am.

On October 7th, 2015, I went in for my surgery. When my oncologist opened me up, she and another oncologist noticed the tumor had gotten bigger, and they both decided that surgery was no longer safe to proceed with. So she tied my ovaries up higher and closed me up. When I was finally awake, she informed me of what had happened, and she and another oncologist explained to me my next steps, which were radiation and chemo.

I went in for a checkup on December 15th and was told great news–that the tumor was shrinking and that the radiation and chemo were working. I explained to them I was having signs of early menopause, so they did blood work and found out that was what it was. I was prescribed an estrogen patch to help with the hot flashes, but when I read that they put you at high risk for uterine cancer, I decided not to put them on.

I went to another checkup just a couple weeks ago on January 19th, 2016, and the doctor said everything is looking great and that he will see me in a few months. I may still not be cancer free, but I am a fighter, and I know that I am gonna beat cancer. Because I Fight Like A Girl!