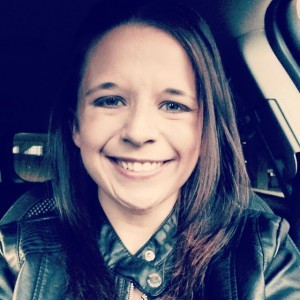 In all seriousness, my endometriosis battle is not that bad. Not yet, anyway, especially compared to the stories of most girls that I’ve read. I feel incredibly lucky to have it as easy as I do.

The pain for me started at the age of 21, on Memorial Day 2009. I remember it distinctly because my mom was getting ready for a BBQ. People were coming over, including my boyfriend, and I could NOT pull myself together. I was lightheaded, throwing up, and it felt like an alien was trying to claw his way through my abdomen. It was like nothing I’ve ever felt before, and it came on SO suddenly. I spent 2-3 hours in unbearable pain, and then… it went away. It gradually stopped. I passed out and took a nap, and when I woke back up, everything was back to normal. It was the weirdest experience.

However, it kept coming back. Every month after that, for one day of my period, I would have one of the most painful experiences ever, for a few hours only, and then it would go away. During those three hours, I would throw up, have diarrhea, sweat a bucket, and bleed through TWO SUPER-SIZE TAMPONS. My husband doesn’t understand that last part, about exactly what bleeding through TWO super-size tampons in THREE HOURS means. It was nuts. It would happen in the middle of the night, at work, at a friend’s house, at a public event. I couldn’t figure out what was happening. Wherever I was, I would find a toilet and cling to it for three hours.

As laparoscopy is the only way to officially diagnose endometriosis, my doctor was leery of conducting surgery right away. She suggested I give birth control a try first. She said it would help with the cramps, so if I DID have endometriosis, it wouldn’t be a huge deal as long as the pain went away, and we wouldn’t have to go through surgery. It definitely made the cramps disappear, thanks to the hormones, but NOT thankfully, the hormones caused me to go crazy. I was so emotional for 24 hours/day, even outside of my period. I would pull off the side of the road to cry for no reason. I woke up in the middle of the night and snuck down to the basement, so I wouldn’t wake up my husband, just to cry. I yelled at him for eating all of the grapes or for making plans for us and not telling me in enough time. I was going crazy, and I couldn’t stand it. I tried two additional types of birth control with the same side effects before I gave up. I went back to my doctor and insisted on the surgery.

I had my surgery on Wednesday, January 9, 2013. My husband waited in the lobby and said he knew I had it before my doctor even came out because it was taking so long. She showed him pictures of all of the dark spots on my organs that confirmed endometriosis and said, based on the number, she was guessing I was Stage I. Of course, as we all know, the ‘stage’ doesn’t really mean anything, as it has nothing to do with your level of pain or ability to conceive.

She cleared out all of the spots in the hope it would help with my pain level. She also mentioned that my appendix was inflamed, so they went ahead and took it out, as I would have probably ended up in the hospital needing another surgery eventually. I went back to work the following Monday.

A few weeks after my surgery, I went back to my gyno for my follow-up. I advised the pain level had not changed, but was glad we had an official diagnosis. We chatted about different pain medicines, completing FMLA paperwork for my job, etc. Then, she stopped me and said, “Have you met with the general surgeon who removed your appendix?” I said no, as after my surgery, they said there would really be no reason for me to meet with BOTH of them for post-op. I remembered he had called me a couple of times, but it didn’t seem urgent, and I already had this appointment scheduled, so I wasn’t too concerned. Then she said, “You should probably call him. After we removed your appendix, we found a tumor on it. A cancerous tumor.” I remember her handing me a tissue and being confused as to why, because I wasn’t crying. The floodgates opened when I got back to my car.

I did eventually meet with him, as well as my Primary Care Doctor who also referred me to an Oncologist. All three of them confirmed the tumor on my appendix as a ‘carcinoid tumor’, which is by definition, cancerous. However, it was extremely small, as they caught it early, and it had NOT spread. I did not go through any chemo or treatments. All that really changed is I now check ‘yes’ on forms that ask if I’ve had cancer. I can’t begin to imagine how this would have turned out if I hadn’t insisted on the surgery in the first place.

After that, things returned to normal. I went back to my monthly, extremely painful days. I researched endometriosis like crazy, and with each story I read, became more and more thankful that my battles are seemingly so easy, compared to most girls’. However, I am constantly fearful of what this could turn into. I read an article once that there might be a link between carcinoid tumors and endometriosis. Every time I feel the slightest twinge of pain in my abdomen (outside of my periods), I freak out that it’s either 1) my endo progressing or 2) another tumor. Or worse, both. I’ve even considered NOT having any children, just because I’m afraid of the pain becoming more frequent and even more unbearable, so that I won’t be able to be as good of a mom as I would want to be. Then the other side of me, the rational side, recognizes that I shouldn’t miss out on a huge part of life just because I’m afraid. Unfortunately, rationalization doesn’t always win.

Thankfully, I’m still fairly young. I would like to think we still have time to decide, but because there is so little known about endometriosis, we might not. I have come to terms with the fact that if I do finally decide I want children, and it’s already too late, I will find a way to deal with it. I tell my husband I’ll surround myself with cats and work at a childcare center to get my fix! Realistically though, I’m just thankful that I had the surgery when I did, and the cancer didn’t progress. I’m thankful that I married an understanding person who has stuck by my side and supported me since the beginning. Lastly, I’m thankful that research is finally happening, so that the world’s future girls who also develop endometriosis will have a chance at a better experience than I have had.