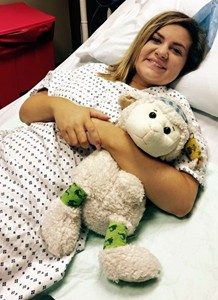 In October of 2014, I was in a minor car accident after six months of driving. I felt fine, nothing serious, but went to the doctor just to be safe. After a few weeks of my pain worsening, we knew something was wrong. My doctor changed up my rehabilitation, but nothing seemed to be working. Before I knew it, it was February, and my migraines were becoming daily. I missed nearly three days of school a week, and I was getting no answers.

“Santanna, good news, we know what’s wrong with you.” If only I could go back in time and tell myself that this moment was like sitting at the top of a huge roller coaster drop. For the next year, my life would be a living hell… and I had no idea. My doctor said the words “Chiari 1 malformation,” and they meant nothing to me. I was 16, sitting alone in a doctor’s office, confused, scared, and relieved all at once. He pulled up a PowerPoint with cartoon pictures of Chiari, then pulled up my MRI. I stared. For the first time, I saw a broken me. I wasn’t just Santanna anymore. I was Santanna with a brain defect, and that terrified me. He said, “I think you will be fine, but let’s send you to a neurosurgeon just to be sure.” I got in my car, called my mom, and sobbed. Something in me knew I was not fine.

June 19th, 2015, 6am. Fluids running through my IV, the people I loved on all sides of me. My mom asked me if I was scared. “No,” I replied with a smile, “this is going to fix me.” I took Chiari decompression surgery like a champ. I was talking, eating, and walking before anyone thought I would, and I was able to go home in 48 hours. I felt great… for two months.

It was dark. My radio was loud. Like a light switch, I felt my body change. I got dizzy, then tunnel vision, and then I couldn’t see at all. I somehow made it to the side of the road, and when I got there and this episode subsided, I laid my head on my steering wheel and sobbed, again knowing I was not fine. Three dizzy spells and four migraines later, I finally told my mom what was going on. We looked at each other like we both had knowledge that nobody else did, that we had just gotten up from that huge drop on that roller coaster, and here we were, preparing for another drop.

Two doctors visits later, “You have me stumped, Santanna,” my doctor said. My mom looked at him, unsure if she should say anything. “What about CSF? I am a member of a parents group, and lots of Chiari kids have issues there.” The doctor looked her way, “Okay, let’s check it, just to be sure. In medicine, you must cross off what’s right to find what’s wrong.” So, I had a lumbar puncture, and then I went on with my life, migraines, dizzy spells and all.

Two weeks after Thanksgiving, we got the call. “We found out what’s wrong with Santanna. Her CSF is 30, double what a normal person’s is. Your daughter has hydrocephalus, and she needs a shunt placed.” A shunt… You mean the tube that will run down my body? You mean another brain surgery? You mean having to sign up for a new shunt placement every 5-7 years? I laid in my momma’s lap, and I sobbed.

December 18th, 2015, 6am. Fluids running through my IV again, and again, I wasn’t scared. “This will fix me, momma.” My mom said my doctor just wasn’t acting right when he came to say my surgery was done. “Is my baby okay?”
“Yes” he replied, “but it didn’t go how I wanted it. Her ventricles collapsed during surgery. We weren’t able to get the shunt where we want it. We are going to have to monitor her.”

Sunday, December 20th, 2015. I’ve never felt pain like I did that night. The pressure build up in my head was enough to make me throw up. No medicine could get my pain under control, and I remember thinking, “This has to be what death feels like.”

Monday, December 21st, 2015. Fluids running through my IV for the third time, but this time I was scared. So very scared. My momma gave me a hug before they wheeled me back, and I sobbed.

Finally, they think they’ve gotten it right, and so far, I agree. I’m beginning to feel better. It’s a battle, but if I’ve learned one thing from this experience, it’s that I’m tougher than I ever imagined myself to be. I am my own hero. Please, let 2016 be better to me than 2015, because even heroes get tired.