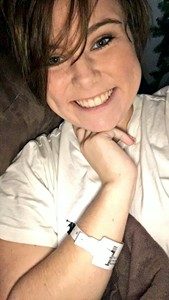 My name is Ashlyn Van Winkle. I’m an 18-year-old from Texas. Back in the beginning of 2014, I began to have awful headaches, along with neck and shoulder pain. Along with the pain, I was fatigued all the time. I didn’t want to cause trouble for anyone, so I kept my mouth shut. Around April, I began to lose feeling in my upper left arm, and the pain I felt in my shoulder and neck was becoming unbearable, so I finally decided to ask my dad for help. Thinking that I may have pinched a nerve or possibly hurt my neck, my dad decided to make an appointment with a chiropractor. At the chiropractor, I had X-rays done, and they informed me that some of the vertebrae in my neck were slightly shifted upward. In order to fix the problem, I started to be seen for neck adjustments and K-taping. They assured me that this would help with my neck pain and hopefully the pain in my arm. I continued to see the chiropractor for about 2 months, and nothing had changed, so I chose to stop going and just deal with the pain, once again.

I spent the whole summer in pain. Because I was just pushing the pain aside, it all got worse, and my headaches became an everyday thing. I’m a student athletic trainer for the school I attend, so in August I had to attend two-a-days to help take care of the football players. I quickly noticed that lifting just a six pack of water bottles caused me an intense amount of pain. One morning, in the middle of September, a football player accidentally ran into my right shoulder. He had hit me so hard that I fell to the ground. Instantly, I had a severe amount of pain in my shoulder and head. To make sure that I hadn’t injured my shoulder, I made an appointment with my family physician for the next day. At the appointment, he checked my range of motion, and while doing so, my arm made a loud pop. Concerned, he sent me to an orthopedic surgeon.

Over the next few days, my fingers started to tingle, and that’s when I knew something had to be wrong. When I saw the orthopedic surgeon, she tested my range of motion as well and was able to rule out that I had broken or fractured any part of my shoulder. She said my range of motion was actually quite good. I told her about the tingling in my hands and fingers, and she said it sounded like more of a neurological problem, so she decided to order an MRI. On September 23rd, I received the results from my MRI, and it indeed confirmed I had Chiari Malformation Type 1, attached 8mm down my spine. With this, I was referred to my first neurologist.

When I met with my first neurologist, he completely shot down the chance of me having surgery. He told me that even though I had Chiari, I would live a completely normal life. He said, at the very most, I would need a little pain management. He even had the audacity to tell me that anyone he had ever seen have Chiari surgery either died on the table or stroked out afterwards. He ordered me to try drying needling to help relieve some of pain in my neck and shoulder. I followed these instructions and ended up going to around 5 sessions. At the last session, I had a total of 32 needles stuck in my neck and upper back. Though I did what he said, I was still disappointed with the appointment and began to seek a second opinion.

My mom posted about my condition on Facebook, and her status was shared by many people. A few hours later, she was contacted by a stranger who was kind enough give her the name of the doctor in Louisiana who had performed her surgery. My mom soon contacted the doctor and was able to get an appointment for November 31st. This seemed so far away. A few days later, the same thing happened. Another stranger gave my mom the name of a surgeon who lived in Houston. Wondering if she could get an appointment with this doctor any sooner, she contacted his office as well. Unfortunately, I could not see him until November 31st either. Since this doctor was closer to home, we decided to go see him.

Between September 23rd and November 31st, my symptoms started to worsen at a very fast pace. I started to get tingling all in my arms, legs, hands, and feet. My headaches turned to migraines. I began to lose my memory as well. I was put on 9 different medicines to try to help the pain and depression I felt. Within this time, I was rushed to the ER on three different occasions for different reasons. On one occasion, I was unable to wiggle my toes, and I could not feel my legs one bit. Luckily, the feeling started to come back in a couple of days. On October 31st, I was pulled out of public high school and put in home school, due to the fact that I could not keep up with the pace of the school and had missed so much school from going to the doctor. Each day, I was getting worse and worse. In my head, all I could think was, “Am I going to die?”

Finally, November 31st came around, and I was in Houston, more than ready to be seen by this doctor. Initially, the appointment was supposed to be a three-step process where I was seen by the neurosurgeon’s assistant, another doctor, and then finally the neurosurgeon himself. But when the first doctor saw how I walked, she decided I was a severe case that definitely needed surgery, and there was no need for me to see anyone else but the neurosurgeon. That same day, I met the surgeon, and he told me he had never seen anything like how I was walking. He said he truly believed I was becoming paralyzed. With that, he agreed to do surgery. Instead of putting me on his schedule, which would have caused me to have to wait six months for surgery, he offered to come up to the the hospital on Wednesday, December 23rd and perform surgery–a craniotomy to be specific. He said he had to do it soon or I would be paralyzed. I said, yes, in a heart beat.

I went in on December 23rd at 9:30 AM. My surgery began at 12 and did not end until 7:30 p.m, when it was supposed to end around 5. It had taken much longer because my CSF had been wrapped around my spinal cord, which was not visible on the MRI. They had to take out much more of my skull than expected. The piece ended up being about the size of my palm. My doctor said I was the youngest person he had ever operated on and by far his worst case. In addition to surgery, I donated 2 pints of my blood to a study on Chiari Malformation. I was released to go home on Christmas Day. I was wheeled into the hospital, but I WALKED out.

I am now two and a half weeks post op, and for the most part, I am doing good. I definitely have a headache still, and I’m extremely sore, but that is all to be expected. On December 23, 2015, my life was saved and changed forever. I still have a very long recovery ahead, but I am ready to take it on. I am able to say that I am an 18-year Chiari Malformation survivor, and that makes me feel invincible.