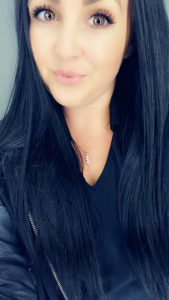 Hello everyone, in December 2019 I was diagnosed with cervical cancer stage 1b. It all started in September 2019; I took a trip to the ER for a pain on my right side. They did a CT scan and determined I had a cyst on my right ovary.

For many years I had pelvic pain, bleeding with intercourse, bleeding in between periods and I have never gotten a checkup or went to the doctor since my daughter was born in 2006 ( I am terrified of doctors, hospitals, broken bones, and blood). For some reason this time I was very concerned, so I made an appointment to follow up on the cyst. I did not have insurance yet and went through woman’s wellness through Planned Parenthood (which I didn’t know they had). They asked me when I last had a Pap, and since it was 13 years ago, they scheduled me for one. That’s where it went downhill. It came back abnormal and I was scheduled to have my first biopsy done in November which was a colposcopy.

After getting that done, the results came back that I had abnormal precancerous cells on my cervix and scheduled me for a LEEP procedure. The LEEP was to cut a layer of my cervix off in hopes to get rid of those abnormal cells. The doctor doing that told me it did not look good and she couldn’t get it all, she also couldn’t stop my bleeding for a little while. After two traumatizing biopsies they called me in December 2019 to let me know I had cervical cancer and it was invasive.

My insurance for work finally kicked in on January 1st. I was referred to an oncologist. I did a pelvic exam with the doctor and she said the tumor was a pretty good size, but didn’t look like it had spread anywhere else. She ordered a PET scan of my body (which is like a CT scan) to see if the cancer had spread. As we waited for the next appointment to find out the results, it didn’t come back as we expected. The PET scan came back abnormal, my right ovary lit up at the top, close to a lymph node. The lymph node also lit up. She said there was something about 2 cm in size on my ovary. It could have been a cyst or the cancer. She said it wasn’t likely that cervical cancer could form on my ovary, but it’s also not uncommon.

So, we were left with two choices. She could open me up and look at that ovary and lymph node to see what that 2 cm hot spot was. If all looked okay, she would proceed with the radical hysterectomy; but there was a chance I would still have to face chemo and radiation. The other option was to not do the surgery and just do chemo and radiation and hope for the best. After hearing the options and all the possibilities as well as her thoughts, we decided to go through with the surgery.

Surgery day was January 28, 2020. She called my husband an hour into surgery and said it was just a cyst and everything looked great, so she proceeded with the surgery and took a sample from the lymph node for testing. Two days after surgery, that pathology came back and she came to let us know that unfortunately the lymph node has a 7 mm microscopic tumor and I would have to do chemo and radiation. She also to let us know the surgery was a very difficult one. It was very sticky in there and hard to move around my organs that she needed to because they were stuck together, which was a result of having endometriosis.

I came home from the hospital on January 31st. I was sent home with a catheter for a week due to her moving my bladder down and it had to settle.
On February 6th, I got the catheter and the staples removed. On February 7th, I had a scare going to the ER with shortness of breath. After spending 6 hours there, they found I have a blood clot in my right lung. The clot was due to having cancer and the surgery made it easier to form a blood clot. My husband had to give me blood thinner shots for 5 days in my stomach and now I’m on pills for 6-12 months. They said it’s a small clot and the thinners should get rid of it.

Here I am 4 weeks recovery, which has been the hardest for me mentally and physically. In the coming weeks will face 6 weeks of treatment, to hopefully beat this stupid C word. I will do 6 rounds of chemo and radiation everyday Monday-Friday for 15 mins each day.
Thank you all for taking the time to read this and continuing to be with me on this journey to kicking cancer’s ***!!
#TeamRyanMarie
Ryan Marie
Ca
Submitted 03/01/2020