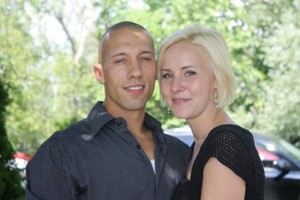 My name is Rivcah MacLean. I am a ovarian/cervical cancer survivor. It all started when I was 13. I dropped to the ground in the school bathroom in a crazy amount of pain. I was screaming and another student heard me and got my teacher. She explained that I probably was having a painful ovulation. As the years went on this would happen every four months.

Then I went to the hospital for the first time when I was 15 because the pain was too much to bare. They told me I had an ovarian cyst 5.5 cm, and also had one burst. That’s  why I was in so much pain. After that I was going to the hospital every four months due to extreme pain, not knowing for sure what was going on. I knew there was something else going on, and I knew it couldn’t just be ovarian cyst causing so much pain. No doctor could explain what was happening, only that I have PCOS.

When I was 16 I had gotten my period but it wouldn’t stop. I had been having it for a month. I went to the doctor and they put me on hormones to try and stop it. I had become anemic due to bleeding so heavily for that long. Three weeks after that I still was having my period, and it was extremely heavy. Then one night the pain was so overwhelming I couldn’t take it. My mom took me to the hospital and the doctor gave me a shot of cortisone. They told me to stop all the hormones after that, thank goodness. A week later I finally stopped my period. I am so grateful for that emergency doctor. I ended up having my period for two and half months, I was so dangerously low in iron. I just felt so hopeless. How can I have a normal life when I am in and out of the hospital.

One night when I was 19 the pain was so bad, I was trying to let it pass but at around 5:30 am I woke up my dad and told him something was really wrong. The pain was different than usual so he took me in and they did a ultrasound. Then they rushed me into surgery for my appendix, it was about to burst. When I woke up they told me they found cysts on my appendix, and that is what caused my appendix to inflame. From there I really knew something else was going on. I started doing my own research and found something called endometriosis. Endometriosis is when part of your uterus detaches and starts to web, and it can spread through our ovaries and organs. It is caused by high estrogen and can cause severe pain during sex, periods, or even all the time like me.

I went to see an OB/GYN right away. She said this is not right and you shouldn’t be in this much pain from cyst. She was amazing and caring, and made me cry. She asked me why am I crying, if it was because I was in pain. I said no it’s because you care and are going to find out what is happening at this time. I was 20 when she tried to control the cyst with birth control. I was doing ultrasounds every three months to see if the cyst were getting smaller. It worked after a year and a half. The large cyst had stopped  growing but I was still having a lot of pain. Finally she said we need to go and do a laparoscopy and see if you have endometriosis and clean it out. She knew I was scared and said, “I promise we will figure out what is happening with you and get it better.”

The surgery took three hours. She told me after, that I was very lucky, and they found I did have endometriosis. I was stage 4 and very severe. I had it every where and she was very concerned, so she decided that she was going to do a biopsy. They did a biopsy and found cancer on my left ovary and on my cervix. The cancer was starting to spread. I was at the beginning stages of the cancer. If we waited six more months I would have had to take out all my reproductive organs.

Looking back I had all the symptoms of ovarian cancer, I was always swollen in my pelvis and had pain in my lower back. I would get sick and throw up during the day. It was very hard to keep food down. I would gain weight very fast and then lose weight just as fast. I would go from being 125 to 100 with in a two week span. It’s hard to let people close to me, the fear of them not understanding and just telling me don’t worry. Easy for them to say. I still have the fear it will come back. I have been in and out of the hospital for 14 years. But I feel so blessed to say now that I have just hit my five years cancer free. I have an amazing fiance that I know will be by my side no matter what. I feel so blessed, I can’t it say enough.  I had so much heart ache, and  I have been through so much.  Now I am stronger then ever! I do the ovarian cancer walk every year to support and bring awareness. One out of five women survive ovarian cancer. I am so blessed I am one. It doesn’t matter your age, it can happen to anyone, I was 22. All I can ask is if you’re a women and if something feels wrong please don’t give up till you find a answer. Don’t let anyone make you feel like it is all in your head because it’s not.