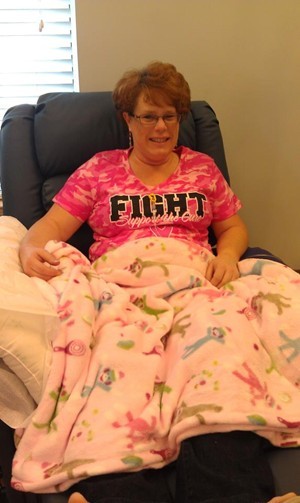 I am a retired chiropractor and have enjoyed having pretty decent health most of my adult life. I have even devoted the better part of the past decade to being a caregiver for a young woman with chronic lung disease. I’ve watched as she has experienced many ups and downs in her health, yet I was thankful to escape with few issues of my own.

However, in June 2012, the doctor became the patient when a routine mammogram returned with an unexpected diagnosis of invasive ductal carcinoma. Doctors initially thought I had a small mass in my left breast which they had planned to remove via a lumpectomy and treat with radiation. However, an MRI that was intended to rule out any areas of metastasis instead revealed two additional areas of concern. So what started out as a “simple” lumpectomy with seven weeks of radiation now left me needing to remove two masses on the left breast and one on the right.

As a Christian, my first line of defense was to pray. And while I would love to say I was miraculously healed, I felt that I was to trust God to walk me through the process rather than sparing me from it. So in July 2012, I had a double mastectomy with reconstruction. Then, after much prayer, I opted to follow the medical route for treatment and chose to undergo 16 weeks of chemotherapy followed by 33 radiation treatments.

I began chemo in September 2012. The first four treatments were supposed to be the worst but other than a handful of the “usual” side effects (hair loss, fatigue, mouth sores and altered taste buds), I got through the “red death,” as they call it, with relatively few issues. Then I started the second phase of chemo which was supposed to be “easy,” with few if any side effects. However, my body had other ideas. Just five treatments into the Herceptin, I had an unusual reaction to the chemo that no one could quite identify. My blood pressure spiked and it left me with pain and tingling up and down my spine into my head every time I stood up. Two weeks later, the day before my next treatment, I had sudden onset of head pain and nausea and had to call an ambulance. By the time I reached the hospital, my BP was through the roof and initial scans revealed that I had an aneurysm in my brain which had ruptured (it had started to leak that day during chemo) leaving massive amounts of blood in my skull to put pressure on my brain.

Doctors gave me a 50/50 chance of surviving the night and worked quickly to drain the excess fluid from my brain by drilling holes in my skull and inserting drain tubes. Initially I had a 30-second memory reset and little idea of what was going on around me or who was talking to me. Gradually things began to improve as the pressure was reduced in my brain. I spent 27 long days in the hospital (mostly in the neuro ICU) as little by little, the fluid was removed and I returned to normal.

Just prior to being released from the ICU, a test was run to see the status of my brain. In addition to confirming that I had an AVM (arteriovenous malformation) ON TOP of the blown aneurysm, the test also caused a stroke which resulted in left-sided weakness and numerous sensory deficits. I had a 10-day reprieve at home before returning to the hospital for a craniotomy to remove the AVM, which at first was believed to be too small to coil (a usual treatment option). It ended up being 10 times larger than expected and was wrapped around my brain stem! The week following brain surgery was extremely challenging, with constant pain and vomiting, but I made it through and was transferred to a rehab hospital where I had to relearn how to walk and do simple things over the course of several weeks. I was pleasantly surprised at how much progress was made in such a short time! I was released to home health and did rehab at home for two weeks before moving to outpatient rehab through the neurosurgeon’s office.

It has been a year since the initial diagnosis and five months since brain surgery. Life is finally getting back to some resemblance of normal. The doctors decided it was best NOT to continue chemo after brain surgery so I moved straight into seven weeks of radiation which I finished just three weeks ago. I still have two more surgeries left before my reconstruction is complete. There are days that the recovery seems to be going much too slow for my liking but I KNOW that apart from the grace of God, I wouldn’t be here to share my story, so any progress is good. And the testimony wouldn’t be complete without sharing that God was not just faithful to me but to my sister who became MY caregiver.  In spite of her own limitations she has walked with me through every step of my treatment and recovery. As I have surrendered the process in prayer, God has been faithful to carry me through and met EVERY need along the way. I’ve had work associates and church friends who have brought meals, done house cleaning and yard work, done grocery shopping and just been overall blessings. My employer held my job for six months despite my absence causing a few challenges. As crazy as it sounds, cancer saved my life – if the AVM had blown instead of the aneurysm, it would have killed me. But a reaction to chemo revealed what was hidden. I now am a walking talking miracle on the mend from cancer with only a few minor issues remaining from the stroke! I’m thankful for every person, medical or otherwise, who has shared this journey with me and helped me fight like a girl! And I give all glory to God for all he has done!!