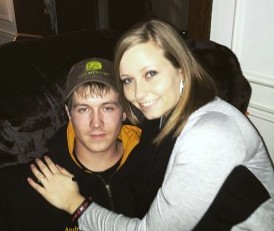 Hi. My name is Raven. I’m so thankful I came across this page. I was playing Trivia Crack, and there was an ad for it. I just had my first lap surgery in November and have felt kind of lost and confused after just finding out about my diagnosis in October! This disease has consumed so much of my mind without me even knowing a name for it.

I’ve known something was wrong with me since I was 18. This will sound a bit crazy, but I got married immediately out of high school and, not long after, stopped being careful sexually. We figured we were married, so if we became pregnant that would be exciting, and if we didn’t, then it wasn’t time yet. Well, after a while, it got to the point where it was frustrating. Although at first we weren’t all that concerned with becoming pregnant, after so long, it was almost expected to eventually become pregnant. I went and saw numerous gynecologists, all saying it just takes time. I explained to them that I had extremely painful periods and irregular cycles. Again they said, all normal and it will just take time. After so long, me and my husband split up. We were young kids when we got married, and neither of us took into consideration what being married really meant. On top of him desperately wanting kids, I carried on with my life, moved to the city, and kind of enjoyed my freedom. Not being concerned about not being able to conceive anymore, I stopped paying attention to my periods and what symptoms came from my period. I knew I was miserable for one week a month, but like the doctors said, it was normal!

Then, I met my now fiancé. We aren’t married, but he wanted to try to have a baby. So after some time, we eventually did start trying. With no luck, we just stopped being concerned with it. If it happened, it happened. Now, back up some. Every time I’ve had sex from 18 on, I’m now 23, it’s been horribly painful. I never explained that to doctors because I had talked to my mother about it, who told me painful sex is normal. Well now I’m living a more settled down life with my fiancé, and we are trying but not consuming our lives with having a baby or not having one. But I started keeping track of my periods and my symptoms.

At first, I thought I was insane. I had the obvious “normal” symptoms: horrible cramps, heavy bleeding. But I was also noticing severe leg pain, lower back pain which is supposedly normal, but it radiates from my lower back down my legs, stomach pains right under my ribs, and nausea. I saw a gyno and explained my symptoms that I had tracked and that I had been trying for a year to get pregnant. He found nothing. He told me that I should be used to the pain by now and some people take longer to conceive and something about women having miscarriages and not even knowing it and mistaking the miscarriages for heavy bleeding. I totally disregarded that but also lost hope. I just gave up! I became very depressed but kept it to myself. I still am now but, again, keep it to myself. I went months just dealing with the symptoms.

I switched from a job that I had for the last 6 years to a new, more high stress level type job working with developmentally disabled adults, very similar to nursing. Lots of lifting and pushing and heavy lifting. I started experiencing severe pain, and the leg pain was constant, regardless of my period, and sharp stabbing pains in my back and side. I went to the ER and was told I have a cyst. I was sent to another gyn. They said it will go away on its own. Returned to the ER and was ignored. He acted like I was an idiot for showing up twice with the same problem. He already made it clear that it was “just a cyst!”

Finally, a friend referred me to her Dr. Richard Naggy! I now adore this man. I went into his office and was very insecure when explaining myself. He assured me I was not crazy and said, you have endometriosis!!!!! Finally an answer. I know this is long, but I haven’t had much time to sort out my own thoughts yet, and this is the first time I’ve been able to feel like I can just vent!! Anyways, he scheduled surgery for the next week because I had a cyst that was filled with blood, and it was bleeding out and causing pain trying to rupture. After surgery, he told me I had stage 4 endometriosis and endometriama. I have a tumor in my left ovary, and it’s twisted around to the other side, kind of like a candy wrapper, how they twist at the ends. I have scar tissue from where the endo has been there for too long. I know there is a better word for it, but I can’t think of it. He said he got as much as he could and gave me the shot to put me through menopause. I have 3 more months of menopause, and then I get to see a fertility specialist. The pain is miserable with endo. I always thought I was just being a baby and everyone was tougher then me. But I don’t even care about the pain. I’m just praying this doesn’t stop me from being a mother.

This is probably the most unorganized story on here, and I don’t even care! This thing has truly made an impact on my life in such negative ways: my first marriage not being able to conceive and the depression that has brought on, to being worried that maybe I won’t ever be able to give anyone children. My fiancé now doesn’t want to adopt. He wants his own. He says we just won’t have kids. But honestly, that doesn’t work for me. He has 1 child. If I can’t have my own, I want to adopt. I don’t need a man in my life who doesn’t want me just because of something that I have no control over, and he wouldn’t leave me, but now I’m stuck with the fact that it isn’t fair to me that I can’t have any kids because he only wants them naturally. This disease has consumed too much of my mind. And the menopause has me thinking I’m losing it!