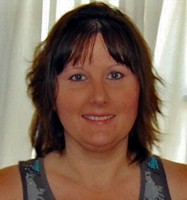 My name is Rania. I will be 40 in January. When I was seven years old, I lived in Sturgeon, MO. There was a chemical spill on the RR tracks 3 blocks from my house. My mother was extremely young, raising me, my six yr old sister, and one yr old brother by herself. Turns out the chemical that was flowing freely was DIOXIN. At the time, and for years, I just thought ok, it happened.

Right after I turned 13, almost to the day, I got my first period. About a year later, my step-father announced at the dinner table (after I had stayed home sick that day) that he didn’t care – my sister or I (who is only 20 months younger than me) were not allowed to stay home for “female problems” because it was just an excuse!

Also, by the time we started our periods, my mother had already had a hysterectomy because when she went to have her tubes tied when she was 26 yrs old, they found abnormal cells, so they did a complete hysterectomy just in case. So, although my mother and I were very close, my sister and I felt as if “menstruation” was a bad word and taboo subject. She and I both only had periods only every 3 to 6 months, which we were in high school and we just thought it was normal.

The summer I was 16, I was 40 lbs lighter than I had been 6 months earlier. I had been told that periods would be less painful and lighter, but I had doubling over pain and my mother took me to the ER. I had my first pelvic exam.  The ER doctor was about 70 yrs old, hands cold as ice, and I cried thru the whole thing.  He called me a baby and told me it didn’t hurt. All they did was refer me to my general practitioner the next day.

I was told that I had IRRITABLE BOWEL SYNDROME (IBS). They gave me meds for it, but they told me I didn’t have enough blood volume and I was anemic. They acted as if the lack of blood was no big deal and I had been anemic my whole life, so I just went with it. By the time I was 17, I was using two super plus tampons and a maxi pad from 7:30 am to 11:30 am, then I would have a lot of clotting (which I thought was normal too) when I changed, then went through the same number of tampons and pad to get me home from school. I thought, again, this was normal. I saw my regular doctor because I was in so much pain and he told me that I must not be following the diet he gave me because I was gaining weight.

When I became sexually active, it was not enjoyable.  Actually it usually ended in hiding tears streaming down my face. Once I was married, my husband and I had trouble getting pregnant, so my regular ob/gyn put me on clomid, then doubled it, then tripled it, to no avail. I had gained a lot of weight from treatment, so my husband and I decided to take a break and I went on birth control and started weight watchers. I lost 60 lbs, but my cycle never fell on the week it was supposed to and most months I didn’t have a period at all.

At age 23, we saw a fertility specialist. To be able to start the hard core fertility treatments, my doctor asked me to take a home pregnancy test, just in case. I could have had bought pregnancy tests by the case for all of them I had had negative and it was a great source of panic for me. My husband knew I was taking it but never thought twice because they were always negative.
I took it and it was POSITIVE! My doctor told me that it must have been the massive weight loss and released me to go back to my regular ob/gyn.

I had a normal pregnancy except that my stomach wouldn’t get any bigger although ultrasounds showed the baby was growing just fine. My back hurt so bad I took Tylenol #3 for most of my pregnancy. I had spasms sooo bad after my perfect miracle baby boy was born – with no complications. I spiked a fever my first night home and they re-admitted me and said that I had a uterine infection.

The pain in my lower right side got worse as time passed. I also had to urinate constantly. When I was 30, there was a cyst on my ovary, but they said that it would probably disolve itself. I had a CAT scan and MRI, but my ob/gyn blew me off. She asked if endometriosis ran in my family and I said I didn’t know because my father had all brothers and my mother had one much younger sister, so I didn’t have anyone to base it on. Her answer was very curt…she said, well then I’m sure it’s not that. I saw her a month later when she delivered my baby sister’s baby (my sister that was just younger than me had never had any children at this point) and she felt terrible because I was hunched over, walking sooo gingerly. But she didn’t offer to see me again.

I got sooo upset and started believing that everything was in my head. Finally, I got bull headed and started researching endometriosis to death. My mom had always told me that she was sure that the reason that my sister and I had so many female problems was because of that chemical spill. I always just rolled my eyes at her. Turns out, dioxin can change the cells in prepubecent girls but doesn’t crop up until puberty. Also, a lot of the precursors were there, especially the misdiagnosis of irritable bowel syndrome. I called my ob/gyn and railed on her until she said she would refer me to one of her associates who dealt with endo. I demanded to only see one of two different doctors, or for her not to bother because there were 12 of them and sooo many had blown me off.

The next week, I saw Dr Trumbower! He walked in the exam room and said, “You have endometriosis my dear!” I couldn’t believe it. No tests, no exam, nothing. I asked him how he could know that and he told me his wife had suffered with it for years and he could tell by the look on my face! He scheduled me for a laproscopic procedure to see if it was there and, if it was, he was going to burn out all he could get to. I only had two tiny incisions, one for a light and one for a laser.

I woke up from anesthesia and first thing I asked my husband was “did they find anything?” I still was convinced it was all in my head. My husband said, “you haven’t talked to Dr Trum yet?” About then Dr Trum came in and had colored pictures to show all the scar tissue that he removed and told me he was starting me on Depo-Lupron shots, then he looked at my hubby and said “she will be a real bitch from this injection!”  I was like “gee, thanks!”

I was told I could go back to work in a few days. Well, I went back to work, at normal extreme force, but my stomach was extremely dystended and I couldn’t even sit up right. By that Saturday, I was in the ER. There was a lot of fluid built up under my diaphragm. I was told that I went back to work too quickly! So, I was put on bedrest for a full week. I had a fit…said I couldn’t miss a full week, I would give them 3 days. The dr told me it was not negotiable. By the way, the depot lupron was supposed to be a three month shot and it was $1200. When I went back for the next injection, I told Dr Trum that I had felt better for about a month, then I was back to how I was. All the while I was taking vicodin and soma every night just to sleep. He started giving me the 3 month injection monthly. I took it for a year, to no avail.

My son was in kindergarten and he asked if we wanted to have more children. I told him that we had decided that Dakota was our miracle baby and that if we ever wanted more there were plenty of kids that needed lots of love and a great family, so we could always adopt. I was scheduled for a hysterectomy to take place in 2 weeks. I was literally excited. At 31 yrs of age, I had a complete hysterectomy. I thought all of my problems would be solved.

I suffered for another full year! I started Hormone Replacement Therapy right after surgery. He removed all of the scar tissue he could find besides all of my female parts. I don’t regret the surgery. Especially when I finally stopped feeling pain after another year.
Now, I am starting to have the pain again. I am terrified. My mother had breast cancer, so I had to go off of all my HRT.

I was soooo optimistic about turning 40 because I felt so great compared to when I was 30! With the pain returning, though, I am having increased panic attacks, I’m more depressed, and hurting so bad all over now too, so I’m afraid I have fibromyalgia to go along with my migraines and endo pain.

Besides our son, who is now 15, we were offered the chance in 2006 to adopt a 14 month and a 3 month old boy. We jumped right in. They are now 5 and 6. So God was listening – I believe that I am going through all of this for a reason. I believe “that which does not kill us, makes us stronger!”

I see a new dr next Friday. I am having them run the gammet of tests, work on my panic attacks, see exactly what is going on – with blood tests, physical exams, and even written tests. I am holding my breath until Friday. I have been extremely short with my children and my husband, but I am trying.

Everytime a woman tells me what she is going through with her period, I tell her about Dr Trumbower, give her his # and tell her to research it. Ignorance doesn’t get you anywhere. There wasn’t even a pamphlet available at my ob/gyn’s office in 2001 about endometriosis. Be informed. I know we need to be proactive w/cancer, but this disease is so debilitating and now I find out that only 15% of women who have a complete hysterectomy never experience a return of this curse. If this were any other disease, they would have stopped using it as a cure for migraines, endometriosis, etc.