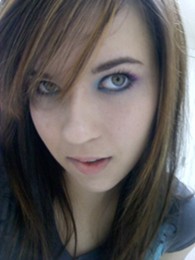 I suppose a good place to start is the beginning. I started my period on January tenth (yes I remember the date, don’t you?) when I was 13 years old. It was painful and heavy but it didn’t last long. I thought it would be easy but I was wrong. The periods got heavier and longer and more painful. I would be up all night lying on the bathroom floor just to feel the cold tile because I’d be burning up. The cramps were so severe I couldn’t stand sometimes and the periods so heavy I couldn’t use tampons, they would fill up in ten-fifteen minutes.

I kept getting worse, I remember when it hit me at my friend’s house, pain so bad I couldn’t stand straight and I needed help to walk. I rolled on the bed and moaned and cried. I was like this for two days and I was taken to youth care. A cat scan was scheduled and I had to drink some nasty fruity crap that made me puke (yes, that gross). The scan showed nothing except that I was impacted with fecal matter (gross again). I recently learned that endo causes severe constipation. So I took fiber and the meds that, you know …. make you go. Soon the pain subsided and I went on with life. My periods kept getting worse and it wasn’t my colon like my pediatrician was thinking and she didn’t know what else to do.

So I went to the GYNO, he was the same one my mom used and he in fact delivered me when I was born. Just to let you know, my mom had endo, too (hysterectomy in 91), so he was a aware of “family history”. I remember him looking at my mom and saying “You know what’s wrong, right?” and my mom looked disappointed and crushed and said “Yes I do”. I apparently was the only one out of the loop. So my doctor explained what was going on……I heard foreign and polyp and a bunch of other words and the first thing I thought was “So it’s like tumors…..like cancer????” He said it won’t kill me but it will be a fight, and it has been a battle of battles I’ll tell you. My mother said “It isn’t life threatening (usually), but it is life changing!” I agree whole-heartedly, my life has been changed forever. Now to set it straight I have not been diagnosed at this point in the story – that comes much later. My GYNO put me on every BC medication he could think of, I have even been on Premerin.

Nothing worked, my periods got heavier, my pain got worse, I was still sick. But the worse part of it all is my periods got closer together. I would have one two weeks on, one week off. I skipped two solid months then had a period for most of a month. I had no schedule, and no rest. The pain was getting more than I could bare and was put on Tramadol. Still that barely took the edge off, and I would lie in bed. Thankfully, I was home schooled at 13 because of bullying in my public school. I just sort of dealt with it until I was 18. Summer of 2008 was torture, the pain excorticating and the illness kept me from eating normally. I lived on pepto bismal and slept for an Alaska trip that lasted 4 months.

When we got home I went back to my GYNO this time a woman (mine couldn’t see me and a woman was easier…. I thought). She felt I needed a laparoscopy, so a date was scheduled October 13 of 2008. It was a scary thing but I just new it would make me better and it did to an extent. My new GYNO said she found a burst chocolate cyst and scar tissue form appendicitis. She said the cyst must have burst over the summer at some point but because of the massive scar tissue my body was unable to absorb the fluid and it sat in my abdomen and festered which is what made me ill. The scar tissue had my intestines, bladder, ovaries and bowel tied together in knots and glued to my abdominal wall which accounted for my trouble with urination and bowel movement. But she said there were no signs of endo. She cleaned it all out and it was supposed to make me better…and did some.

The old pain was gone but the underlying pain reared its ugly head. So the doctors went back to my colon thinking it might be colitis, but the diet didn’t work and the stomach meds didn’t either. I got rid of the female doctor because she said there was nothing she could do for me and I went back to my original. He is amazing I might add. He suggested I try Lupron therapy in 2009. Not knowing what it is, I got afraid. I did research and talked to a friend who I found out has endo too and took Lupron. She said go for it so I did. The first day did not work out so well. Cramps started, they got worse… and worse… until I was on the couch screaming unable to move. My parents got me in the truck and rushed me back to town which is 30 minutes away; we got there a lot faster than that. The first thing the doctor said when he saw me was “Give me x amount ccs of Demerol and Phenergan stat!” I am scared to death of needles but this one I didn’t even feel. I was in so much pain I would have taken an epidural. Later the Dr. said I was put in false labor by the Lupron and sometimes it happens (thanks for the heads up).

I was on the Lupron for 12 months until I was taken off. Through all the symptoms it is the best thing I have done. My period has come back this November and it is on schedule for the first time. I still have pain but not like before. I would recommend Lupron to anyone. But I won’t do it again – lol. I can handle the symptoms, I just don’t want to. When my endo comes back I will try other methods until something works again. Oh and because the Lupron helped me, my GYNO said that is a positive diagnosis of Endometriosis. However…..now that I am off of the Lupron it seems I am going back to where I was. I am beginning to vomit from the sheer pain and unrest. I pray for one day, that’s all I want, one day with out pain.