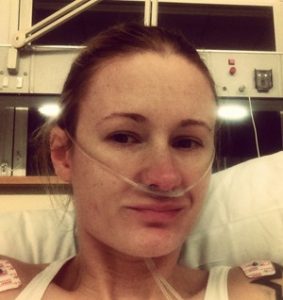 All I keep hearing is my story is unheard of and very rare, but 4 months into my painfully poor recovery, I’m now realising I’m not the only person who’s been let down by doctors and surgeons!

Pre-2008, I had always suffered painful periods that lasted 7 days. But the rest of the month, I was always pain free, so it never really bothered me. In October 2008, I was blessed with the birth of my daughter, which was incredible, only we didn’t know how my health would change in the coming months. When my daughter was 6 months old, my husband made me go to the doctor’s, as I was suffering from chronic fatigue, felt very down, and was suffering with periods that seemed to be painful for a lot longer than previously. At this appointment, they decided to do some blood tests, and it came back that I had hypothyroidism. They said it was to blame for my fatigue and painful periods and that medication would sort the issue. So off I went with my medication.

Between 2009 and 2013, I went back to my doctors, begging for help and pain relief, as during that time, my periods had gotten heavier, lasting 15-20 days, and unbearable pain now affected my whole pelvis, my back, and bowels, making sex impossible. And the fatigue was getting more difficult to manage. My doctors kept blaming my thyroid and kept doing blood tests, which occasionally showed I was anemic, but my thyroid function was always normal. So they just dismissed my pain and told me to deal with it and that periods are meant to be painful and to try exercise. So I did! I went out and bought myself a bike and joined a triathlon club!

I pain managed through exercise until 2014, when I’d had enough. The pain and heavy bleeding had stopped me from running, due to the heavy bleeding knocking me about so much. And from November 2013 to January 2014, I’d only had 6 days where I hadn’t bled, so I was feeling pretty wiped out! I booked in to see a GP, and finally, I had a GP that listened. He referred me to my local hospital to investigate my pain and bleeding further. Finally, I felt listened to!

In March 2014, I had a meeting with a surgeon who assured me he would sort the issue out. He told me that fitting the Mirena coil and a D&C would sort my issue out and that I would have reduced pain, little to no bleeding, and lead a “normal” life again!!! Two weeks later, I was taken down to theatre, and when the surgeon came to see me post-surgery, he told me I had a tilted uterus, which is why my bleeding and pain was so bad, and he had moved my uterus to stop my pain. I went home feeling relieved and thinking life would be better. I was so wrong!!!

I gave the coil up until November 2014 to work and make a difference, and it did nothing at all. My period slowed for 2 months, during which I spotted, and then I was back to very heavy bleeding that remained constant until November. The pain continued to get worse and worse. The fatigue made my job more difficult, exercising got to the point where I couldn’t enjoy it anymore because nothing dulled the pain, and the strain on my marriage due to lack of intimacy was very stressful. So I went back to the surgeon, begging for help, which is when he offered me a hysterectomy, and I jumped at the chance because I was so desperate for relief.

On November 11th, I had a subtotal hysterectomy by open surgery. I woke up after surgery, feeling like I’d been hit by a bus, but I knew it was worth it, as the gains post-recovery would be epic. The surgeon came to see me several hours after surgery and told me everything in my pelvis was covered in endometriosis, and that’s why I’d been in so much pain, but it was all sorted. Until now, I’d only heard of endometriosis because my cousin had suffered a long battle with it and had various surgeries, but that was all I knew about it. I told her what the surgeon had told me and she was not surprised at all and said she knew it all along!!

I was told my recovery would be between 6-8 weeks, maybe longer, but they expected my recovery to be quick due to my age and fitness. I had several appointments with my surgeon post-op, as I was in a lot more pain post-surgery. I had a very painful bladder, which makes urinating a truly awful experience, and oddly, I have mobility restrictions. But the surgeon was dismissive and uninterested. 31st December was my last appointment with the surgeon, where I discussed the same concerns: my increased pain, my bladder issues and my reduced mobility. He advised me my recovery was so poor due to my endometriosis and that I should go away and pain manage! I thought the surgeon had sorted the endo out, and he confirmed he didn’t, but he also wouldn’t clarify how bad my endo was or how I was meant to cope with it. He did tell me the endo would mimic and still be painful when I have “menstrual cycles,” which before my op was all the time. This made me feel like the hysterectomy had all been for nothing because all that had been taken away was the visible evidence of my heavy bleeding!

So I went home frantic and upset and started looking for specialists in endometriosis, and thankfully I found one! I booked in with him at a cost of £250, and wow, he was so in touch with how to talk to and deal with women suffering with chronic pain. He was the first doctor who never made me feel crazy! Thankfully, this surgeon had started up an NHS funded clinic, which meant it was possible for me to be treated by him, as there would be no way I could fund further appointments. The surgeon booked me in for a lap to investigate how much endo I had and why I was suffering so much post-hysterectomy. He explained that he would treat and fix what he could in the lap, but if there was too much to do, I would need another operation. But he did say that was worst case scenario.

So I had my lap, 21st Feb., and en route I couldn’t help but think maybe I was just crazy and maybe I was just having a bad recovery and that maybe the other surgery didn’t tell how bad the endo was because he actually did treat it all! Well, I was wrong again! Post-surgery, the surgeon came to see me and gave me brief details. He started “I couldn’t do anything today because it’s bad, but fixable.” He advised me my endo is moderate, which I now know to be stage 3, and that I had severe adhesions and that my bowels were stuck to my pelvis in two places. Gutted was not the word!!!

I had a sit down chat with the surgeon, two weeks post-op, as he wanted to discuss his full findings and my options. He advised me that my adhesions were affecting all my organs in my pelvis and that’s why I’ve been in more pain and had restricted painful movement post-hysterectomy because all my organs were joined to each other and then joined to my pelvis. So now I’m waiting for my next surgery, which will take place 11th April, and I will be having excision of the endometriosis, bilateral oophorectomy, adhesiolysis, ureterolysis bilateral and excision of cervix. 3 surgeries in 5 months, and I should be pain-free and hopefully able to sleep again and walk pain-free.

I have missed my life so much. I miss playing and running round with my daughter. I can’t wait to ride my bike again, go swimming and go for a run. I’ve spent 4 months dependent on painkillers just to get up. I can’t wait to start living again!!!