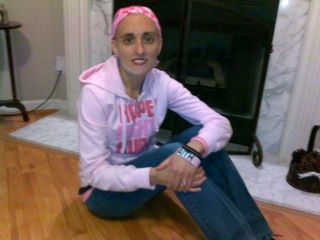 On June 28th, 2011, at the age of 37, I found a mass in my right breast. My initial thought was not  again, not another health issue. I had already faced numerous health issues that year which included a colon resection just a few weeks before. It was an emergency situation and I had no idea I even had diverticulosis, which had turned into diverticulitis and a rupture/abscess of my colon. I spent about 11 days in the hospital. I was still healing from that and now this. Within a day or two after finding the first mass, I found a second one. There is a history of fibroid’s in my family. My mom had them when she was younger but they were always benign. I had even had one seven years before when I was pregnant with my son. I had it removed when I was 34 weeks pregnant with him. It was in the same breast and same spot as one of these masses. I was told it was benign, so I had no reason really to think otherwise. I knew my insurance didn’t require referrals, so I contacted the surgeon who removed the mass seven years before. He had me come in and suggested I have them removed just to be safe and sure. I agreed. I ended up having to wait two weeks or so for the results. I did not know that the results would be in at the time of my post operative appointment and I went by myself. I remember lying on the doctor’s office bed and seeing my surgeon come in with papers in his hand. I asked him did he get the results back and he answered yes and said that they had come in that day. Then he told me they both came back “malignant.”

I don’t know what shocked me more, him saying both masses were malignant, or knowing that I had just been diagnosed with breast cancer. I remember that moment that day and still think how hard it would be to be in his position (knowing he was going to have to tell me). By the grace of God, I found the masses on my own. I wasn’t doing breast exams and was late scheduling my GYN appointment and (at this time) hadn’t been there yet for my yearly checkup (I go every year). I nursed both my children for 15 months each. I had just finished a fitness boot camp and worked out at the YMCA. I eat fairly healthy. Yes, I eat bad things too, but don’t we all? I hadn’t done anything wrong. My general surgeon was still working with me. I had an MRI and was still waiting and wondering if the cancer had spread or what stage I was in. The waiting was taking a toll on me. I needed to know. I ended up making an appointment with another hospital, which I feel was best for me and it is one of the best! I was tested and do not carry the gene per the bracanalysis (BRAC). I chose to have a bilateral mastectomy and also was planning reconstruction at the same time. However, when they did the mastectomy they found cancer in my sentinel node and was at the time unable to perform the reconstruction we had planned due to the possibility of radiation.

The plastic surgeon put in tissue expanders and I saw him periodically to prepare for my future reconstructive surgery. They removed about 14 lymph nodes. I praise God that only the sentinel node had cancer in it! I was told that there was residual invasive cancer found in my right breast at that time and that there were fibrocystic changes occurring in my left breast that could turn into cancer later. I got the pathology reports back from my surgery and was told that I didn’t need radiation, but that I would need chemo, which I already pretty much knew. I had other tests completed including a CT scan and bone scan. I had a port put in and did chemo from October 2011 until February 2012. I took three chemo drugs: Adriamycin, Cytoxan, and Taxol. On March 28, I had a PET scan and was told that I was cancer free! My main reconstructive surgery was on April 19, with a few other plastic surgery procedures to follow. I could tell so many stories of how God has put people in my life (even new ones who are a blessing to me) and provided scripture from the Bible to me at just the right time. I couldn’t have gone through this without him. Even during this difficult time, I saw his hand in all this. I am thankful for all the support and prayers of my family and friends.

I want everyone to get regular checkups and do self exams. If you find a mass, don’t assume it is a fibroid or a clogged milk duct. Get it checked! I have heard stories where women were told it was a clogged milk duct or it was just changes in their breast and it ended up being cancer that had progressed. I was told I have dense breasts and have been having mammograms for years. For me, the mammogram did not pick up either of my masses (they were easily felt). However, the ultrasound did pick up both. Having dense breasts is supposed to increase your chances of breast cancer. I also used fertility drugs.. But we don’t know what caused my cancer. My cancer was estrogen and progesterone positive. Some family members on my father’s side have had breast cancer, although I tested negative for the gene. It is so important for us to know our own bodies and be aware of changes that occur…I am thankful for the doctors, chemo nurses, and other medical staff that have taken care of me. I am so glad that I took a proactive approach toward my health. Although my children were only four and six at the time I found out I had cancer, we still tried to explain things to them on a level they could understand. Last but not least, I want to say that my husband got promoted to Chief Petty Officer with the Navy about the time of my diagnosis. He chose unselfishly to put off his induction and pinning (which was to happen at the time I was starting chemo in 2011) until a later date. I am happy to say that in September of 2012, I had the honor of pinning him. 🙂